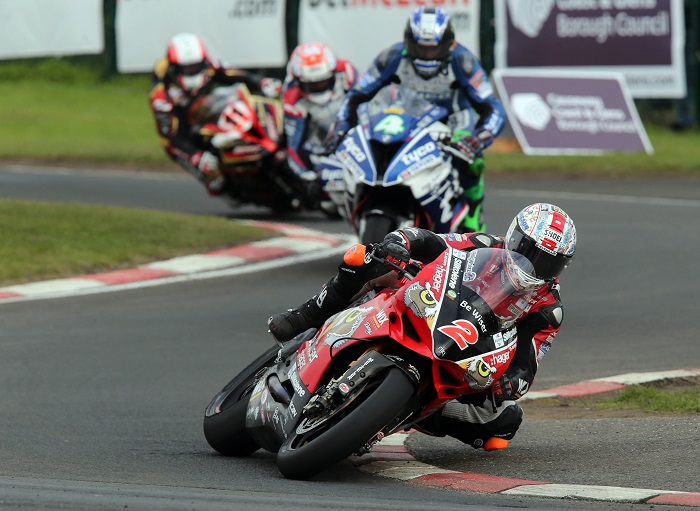 After a week of great action at this year’s event, the North coast races were given a major boost with the announcement that BSB star Glenn Irwin, will return to Portrush next May on the PBM/Be Wiser Ducati.
“I’ve had a good season with the PBM Ducati team, winning the North West and getting my first BSB win despite getting injured at Knockhill.” the 27 year old said.

The Carrickfergus rider brought the local fans to their feet last May as he edged out Alastair Seeley on the final lap of the feature NW200 superbike race. Irwin is delighted PBM team boss, Paul Bird, has included the North West at the top of his 2018 agenda in his second season with the team in the British Superbike championship.

“I am really looking forward to coming back to the North West again.” he smiled.
“It has a special buzz for me because it is where I watched racing when I was a kid. After last year I sort of feel that I am now the person that I used to watch and that is really cool.”

The young BSB star wants to repeat the scenes of jubilation that followed his maiden victory last May.
“That last lap was like a football match with the whole crowd getting involved.” Irwin smiled.
“I am as hungry as ever to win at the North West and I know how much the team want to win again too. I thrive on support and I know how much I get from the fans at home. I grew up in Northern Ireland and for us winning the North West is like winning a world championship.”
Attracting yet another top BSB team and rider to the North West has also been a major coup for Event Director, Mervyn Whyte.

“Paul Bird is a good friend of the North West 200 and it is great news that he will be bringing Glenn and the PBM/Be Wiser Ducati back to Portrush in 2018.” Whyte said.

“Glenn put in an amazing performance against the rest of the world’s finest road racers this year that really captured the imagination of local race fans. Now they will have another fantastic opportunity to watch him in action next May and see if he can repeat that incredible feat.”