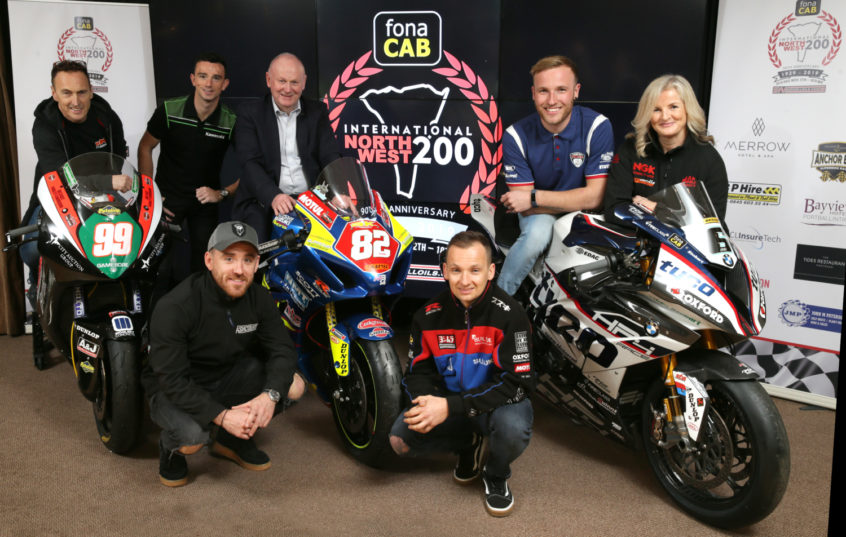 It has been a busy few days for the 2019 fonaCAB International North West 200 in association with Nicholl Oils as the race was launched at consecutive events in Coleraine and Dublin.

The Lodge Hotel, Coleraine was the venue for the popular Meet the Stars event on February 28 with a packed house enjoying an evening of race fun and chat with some of the big name riders who will be in action on the Triangle course on May 12-18.

Representatives of the title sponsors, fonaCAB and Nicholl Oils plus all of the race sponsors joined the Mayor of Causeway Coast and Glens, Cllr Brenda Chivers at the event.

The highlight of the evening was the unveiling of the new V4R PBM/Be Wiser Ducati which 24 times North West winner Alastair Seeley will race in the two Superbike races at this year’s event. Team boss Paul Bird travelled to the launch to take part in the announcement which was broadcast live by the BBC.

The following day the riders headed to the Carole Nash Irish Motorbike and Scooter show where they took part in the inaugural ‘North West 200 Day’ in Dublin’s RDS complex.  The huge crowd was entertained throughout the day in a series of interviews and autograph/selfie sessions with the North West 200 race stars.

‘It is too close to call who will win the Superbike races at this year’s North West.’ the Ballyclare racer told the packed RDS audience.

‘I can’t wait and I am really looking forward to being there to see what happens.’

Jonathan will also take part in a special chat show in the paddock marquee during this year’s NW200 race week.

‘We wanted to take the popular Meet the Stars event to the Irish motorbike show in Dublin. The response was fantastic, with thousands of visitors to the race stand and dozens of new members being recruited to the NW200 Supporter’s Club over the three day show. The news of Alastair Seeley’s PBM/Be Wiser Ducati deal has really captured everyone’s imagination and there will be even more exciting announcements to come in the next few weeks.’