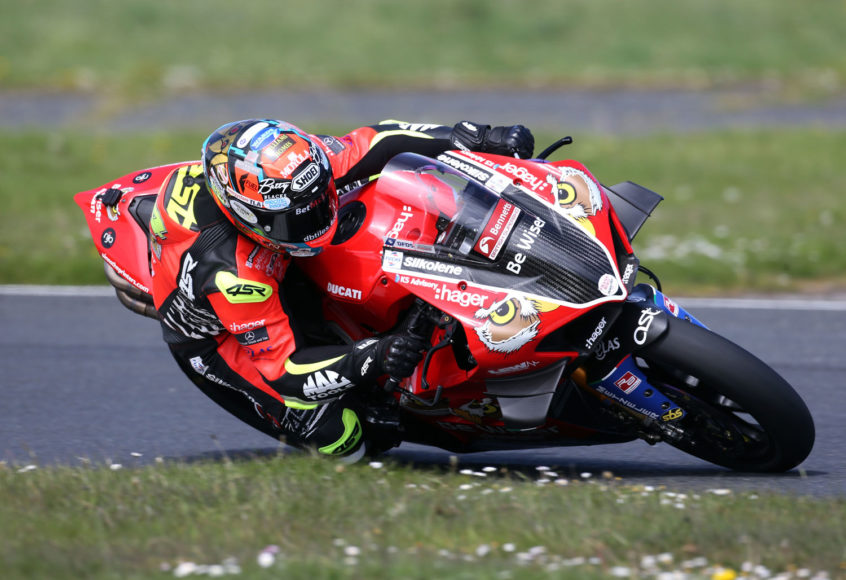 Alastair Seeley has enjoyed his first full test on the PBM/Be Wiser Ducati he will race in the superbike races at this week’s fonaCAB International North West 200 in association with Nicholl Oils.

The 24 times North West winner declared himself happy with the V4RR superbike’s performance after completing dozens of laps during a track day at Kirkistown.

‘It is a bit of a lastminute.com test but at least I am getting time out on the bike.’ the 39 year old said as he sported new PBM leathers and helmet design.

‘It’s a case of doing nothing silly, gathering up the laps laps and learning the bike. It feels good and it will feel even better going up the big, long straights at the North West.’

Aside from a brief outing on PBM Ducati teammate Josh Brookes’ machine during the Portimao BSB test in March, the Carrickfergus rider has not ridden the new superbike he hopes will bring him his 25th North West success.

‘We started off where Josh finished at Oulton Park in the last BSB round but the bike felt quite hard on the springs.’ Seeley explained.

‘Each time we come in we are changing the bike more to my preference and we are slowly getting there. By the end of the day we will have changed quite a bit and hopefully found a happy place for me.’

It was Seeley’s second visit to the Co Down track this week as he makes his final preparations for North West 200 practice which begins on Tuesday. The British Supersport rider rode his EHA Yamaha R6 that he will race in the 600cc races at Portrush during a day of filming for BBC NI’s North West coverage alongside British Touring Car champion, Colin Turkington.