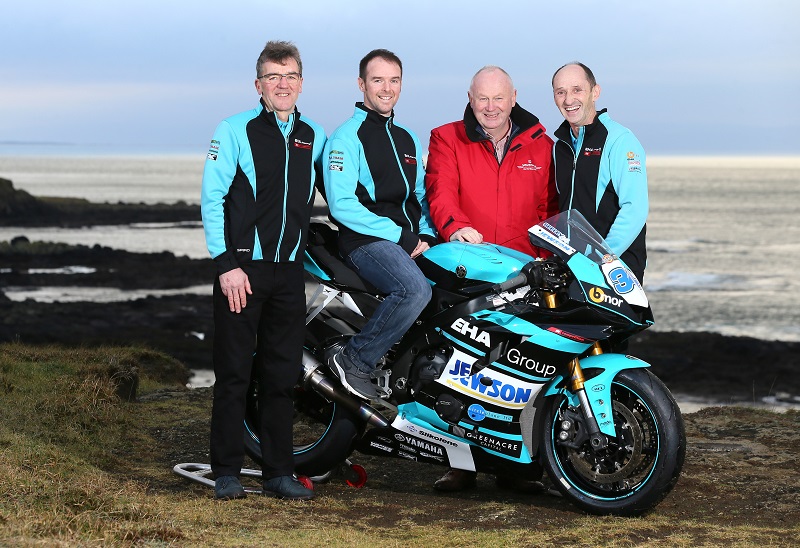 The Vauxhall International North West 200’s most successful rider, Alastair Seeley, says he wants to win five races at next year’s event as he unveiled one of the machines he hopes will help him add to his tally of 21 victories.

The Carrickfergus man will race a R6 Yamaha next May in the colours of British Supersport championship team, EHA Racing, in both 600cc races on the 8.9 mile Triangle circuit.

The only rider to win five races at the North West was Phillip McCallen in 1992. With Seeley only racing in four events on the main race day, he cannot equal McCallen’s feat of winning five in a single day but the 38 year old says he has his sights firmly set on taking five wins over both race days.

“Because of some of the circumstances at this year’s races, I want to improve.” Seeley said.

“I am extra motivated for next year, very determined and focussed to show there is a reason why I am the record holder at the North West.”

Seeley is confident he will have a machine capable of adding to his tally of ten NW200 wins in the 600cc class.

“Racing against the EHA team in the Supersport championship this year, I saw how fast their bikes were and how professional the team is.” Seeley explained.

“It is the class I’ve enjoyed the most wins in at the North West and the bikes suit my style and stature. I’ll be back in the British Supersport championship next season so I should be dialled in coming to Portrush. It is also nice to be involved with another team that has a strong local connection with the event.”

EHA Racing is run by Edward Allingham, a former NW200 racer and businessman originally from Eglinton but now based in England. His team has become one of the frontrunners in the British Supersport series with Allingham’s son, David finishing fourth in the championship this season and Ross Twyman taking sixth.

EHA Racing previously raced at the North West in 2016, with Ben Wilson competing in the Superstock class on an Aprilia, but Allingham admits securing Seeley’s services is a major step up for his squad.

“We have wanted to bring the team home to Northern Ireland and we got the opportunity to put Alastair on the bike.” he explained.

“It is really exciting to shake hands on the deal and it would be good to show people what we can do. We will be taking the North West very seriously.”

Allingham says his team has the experience to handle the pressure having a rider of Seeley’s calibre on their machinery will bring.

“With a rider like Alastair Seeley on our bike we have to aim to win and although we are a young team, just in racing four years, we have the resources and experience to handle any pressure. We had eight podium finishes in the British championship this season and Alastair’s crew chief will be Ian Newton, a former North West winner.”

PACEMAKER, BELFAST, 6/12/2017: Alastair Seeley pictured with Edward Allingham of EHA Racing and Vauxhall International North West 200 Event Director, Mervyn Whyte on the North coast as it was announced Seeley will race a R6 Yamaha in EHA Racing livery at the 2018 NW200.
PICTURE BY STEPHEN DAVISON

“We are delighted to have another top class team like EHA Racing team on the North West grid for 2018.” Mervyn Whyte, NW200 Event Director, said.

“The Allingham team have proved their capability in the British championship and they will have the man with more wins than anyone else at the North West in the saddle. It can’t get much better!”