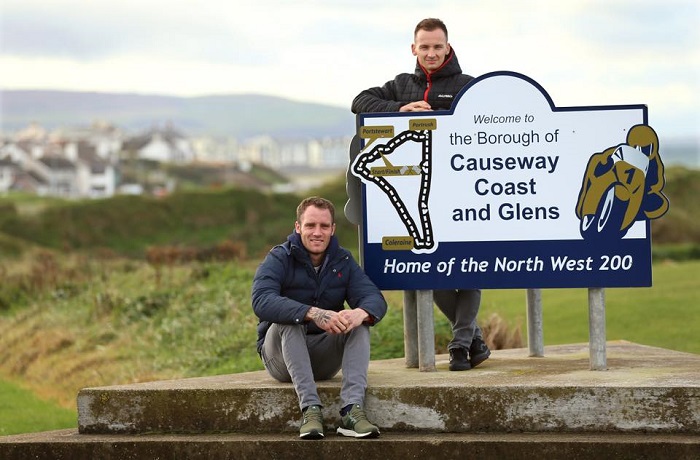 The International North West 200 is set to have two former BSB race winners amongst the newcomers on the grid in 2018 as Tommy Bridewell and Richard Cooper plan their road racing debuts on the famous 8.9 mile Triangle circuit.
34 year old Cooper, who finished runner up in the 2017 British Superstock championship and has three seasons of BSB competition on his racing CV, was joined by Bridewell on a visit to the North coast venue today.
The Nottingham man said he had discussed racing at the NW200 with his Bennett’s Suzuki teammate, Michael Dunlop and wants to make his roads debut at Portrush next May.
“I have asked Michael what it is like and having someone with his experience in the garage is a positive thing.” the 34 year old said.
“I know that I can count on him to give me honest answers.”
Bridewell, who rode for Philip and Hector Neill’s Tyco BMW squad in 2015, has competed in the BSB series since 2009.
“It has always been in my mind to have a go on the roads.” the 29 year old said.
“I know quite a lot about the North West because I visited here in 2015 and I am friends with Martin Jessopp and Ian Hutchinson.”
Still without a ride for 2018 after suffering what he described as a “frustrating” 2017 with the WD40 Kawasaki BSB team, the Wiltshire rider is now chasing a deal that will allow him to combine his roads debut with British championship racing.
“I want to integrate riding at the North West with my superbike plans in 2018.” he explained.
“My main focus is becoming BSB champion but I definitely want to come and race the North West.”
Cooper will remain with Stuart and Steve Hicken’s Suzuki team for 2018 and would like to ride a superstock spec GSXR alongside a supertwin machine as he learns the NW200 ropes.
“Suzuki make a twin and I’ve looked at that as an option and it’s not out of the question.” he explained.
“I think it would be better to do two classes as a newcomer.”
Neither man claims he is expecting earth shattering results in their first year on the high speed Portrush-Portstewart- Coleraine course but nor are they short of confidence in their own abilities.
“I wouldn’t be coming to the North West trying to win or even to make the top ten in my first year.” Bridewell admitted.
“ I love the North West atmosphere though and I wouldn’t be worried about results as long as I was enjoying it. If you enjoy it then you can get sucked along and maybe get into a group and then you never know what will happen.”
Cooper sees his ability to adapt quickly to the variety of machinery he has raced as a major advantage as he contemplates his North West debut.
“I am 34 and I have done a lot of racing in different classes.” the Nottingham man explained.
“I’ve ridden in one make series and European championships as well as BSB and Superstocks. I have learned to be able to ride around problems.”
“I would want to try to take in as much as possible in year one but it would be hard to say whether or not I might make the top ten or not.” Cooper explained.
“I know what I am capable of and I know who is competitive at the North West. I know who I can run with on the short circuits and I want to come to the North West and do myself justice, not just make up the numbers.”
NW200 Rider Liaison officer, Steve Pater was on hand to offer guidance to Bridewell and Cooper during their visit.
“Tommy and Richard have lots of racing experience.” the eight times NW200 winner said.
“They have been attracted to the North West to make their roads debuts here because they like the approach and the lack of pressure, plus there are plenty of people here to offer them support.”
“It is great news for the North West 200 fans to have two riders of the calibre of Tommy Bridewell and Richard Cooper wanting to come to race at Portrush.” North West 200 Event Director, Mervyn Whyte said after the visit.
“Josh Brookes, Peter Hickman and Glenn Irwin have all made their mark at the North West in recent seasons and there is no reason why Tommy and Richard can’t do likewise.”