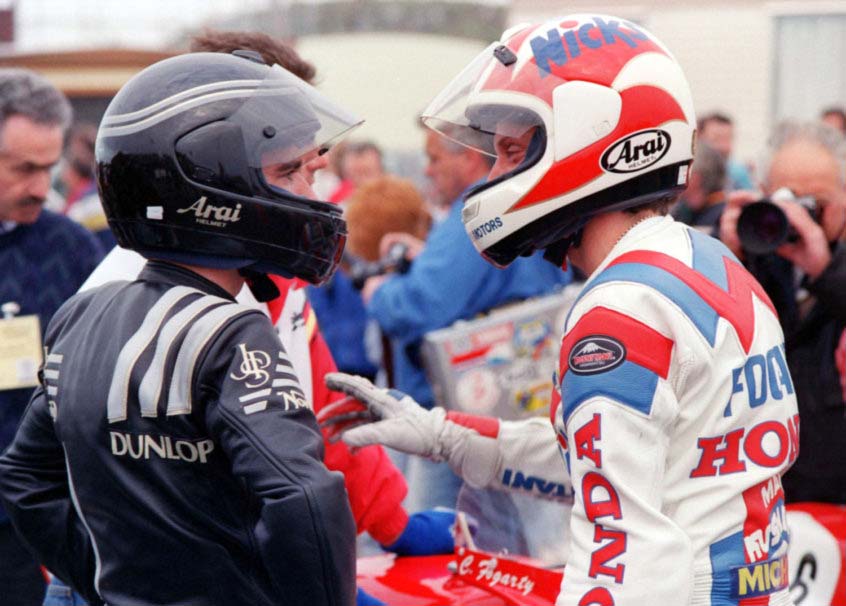 Four times World Superbike champion and former NW200 winner, Carl Fogarty, will be on the grid at this year’s Vauxhall International North West 200 on May 13-19.

A double superbike race winner at the north coast event in 1993 on a Moto Cinelli Ducati, Foggy wont be racing this year but he will be one of the star attractions for race fans at the Meet the Riders event in Coleraine town centre on Friday afternoon. The Blackburn man will join current North West racers Alastair Seeley, Glenn Irwin and a host of others at the popular and free event.

The 2014 King of the Jungle in the ‘I’m a Celebrity, Get Me Out Of Here’ television series, Fogarty will also take part in a special past NW200 winners chat show with Brian Reid, Ian Newton and Sammy Millar. The event will be compered by Adrian Logan and Steve Plater in the paddock marquee at 7.30pm on Friday, 18 May.  Tickets cost £5 and can be purchased at the door or via the race ticket office.

The 52 year old has been busy penning his new book, ‘The World According to Foggy’ and he will be signing copies at Waterstones in Coleraine on Friday, 18 May from 3.30 to 4.30 pm. Foggy will also be available for signings before and after Friday night’s chat show in the Hospitality marquee from 6.30 pm to 7.30 pm and again from 9.30 pm to 10.30 pm.

During Saturday’s race day, the former world champion will be on the race grid, where he will rub shoulders with current World Superbike king, Jonathan Rea and present the trophies to the day’s winners. PACEMAKER, BELFAST, 8/10/2003: Carl Fogarty on his way to winning the North West 200 in 1993. The road racing legend will attend the 2018 Vauxhall International North West 200.
PICTURE BY STEPHEN DAVISON