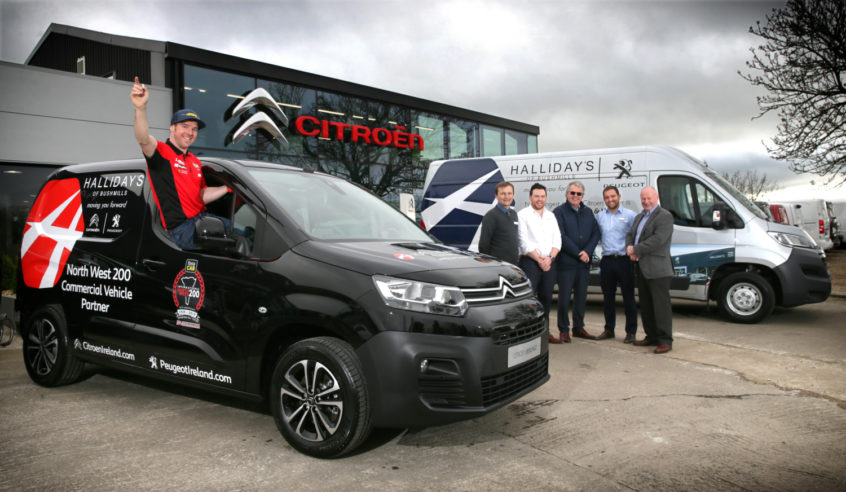 HALLIDAY’S OF BUSHMILLS ANNOUNCED AS THE COMMERCIAL VEHICLE SPONSOR OF THE 2019 FONACAB INTERNATIONAL NORTH WEST 200 IN ASSOCIATION WITH NICHOLL OILS.

Halliday’s of Bushmills will be the commercial vehicle sponsor of the 2019 fonaCAB International North West 200 in association with Nicholl Oils.

The Citroen/Peugeot dealership will supply a range of up to 20 vehicles to the north coast event during the May 12-18 race week.

‘The North West 200 is a fantastic event to be associated with and Halliday’s are delighted to be on board for 2019.’ proprietor, Lexy Halliday, said.

‘My grandfather, father and uncle John have all been NW200 race sponsors and provided the road closing cars for the event- Citroen CX-GTI’s- back in the 1970s and 80s. When the opportunity arose to support the 2019 event with commercial vehicles required, I was more than happy to oblige. Mervyn Whyte and his team have been a pleasure to deal with and we would like to wish all the riders, officials and spectators of the North West 200 a safe and sunny event in May.’

Lexy also revealed that North West 200 Saturday is the only Saturday of the year the dealership’s workshop closes, such is the love of bikes of the Halliday’s technicians! The Halliday family have also sponsored the machinery of a number of local riders down the years, including the late, great Joey Dunlop whose portrait, complete with the Halliday name emblazoned on his machine, hangs proudly in the Bushmills showroom.

‘It is great news that we will have another local company involved with the NW200 in 2019.’ Event Director, Mervyn Whyte, said.

‘The Halliday family have enjoyed a long involvement with the NW200 and we are delighted to have their support once again. The vehicles being supplied will be used for a variety of duties including course set up and machine pick up.’