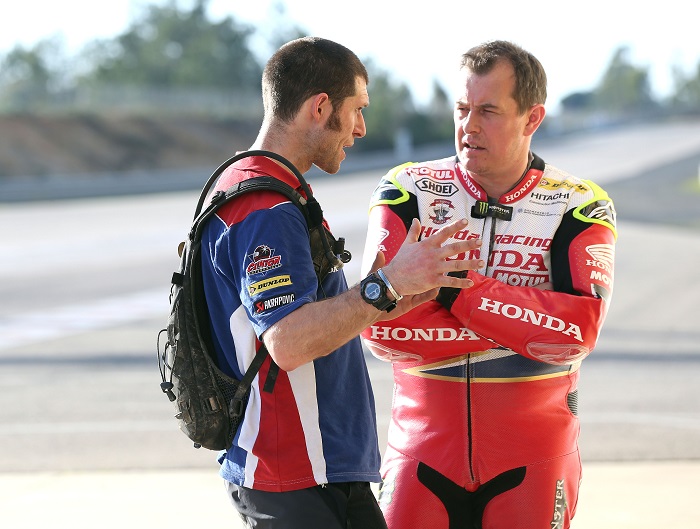 With less than a month to go until the start of practice for the 2017 Vauxhall International North West 200 the official Honda Racing squad of John McGuinness and Guy Martin are gearing up for a strong challenge on their 2017 spec Fireblades.
The duo completed their first test on the superbike spec version of the CBR1000RR SP2 recently at Castle Combe. John McGuinness suffered a dislocated thumb after crashing on the second day but is expected to be fully fit for the North West. Both McGuinness and Martin were happy with the progress the team was making with the new bike.
“It seems easier to match the times that we have done here before with this bike.” McGuinness said after the test.
“It is a new chapter with a new bike and you can’t just rock up and be on it from the word go. I really like the new engine braking system and this bike doesn’t back in to corners the way the old bike did on the brakes so it isn’t as physically demanding to ride.”
McGuinness’s teammate, Guy Martin enjoyed dozens of trouble free laps at Castle Combe.
Honda race boss, Neil Tuxworth admitted the bikes had arrived later than had been expected but said good progress was being made in getting them prepared for the new season.
“Considering the mechanics were still working on them the night before the test we are very happy with the progress we have made over the two days.” Tuxworth said.
“With the roads’ bikes running kit ignition they are easier to set up than the BSB superbikes that run the Motec system. We will come back to Castle Coombe in a few weeks time and that will be the important test because we will have the full spec operating on both superbikes.”
Both riders will be trying a new direction with the new bike in 2017. There will be a major change for Lincolnshire man, Martin with his move to Dunlop tyres after riding on Metzeler rubber in the Tyco BMW and Suzuki team since 2011. McGuinness will also make a major shift to Ohlins suspension after years of running with K-Tech and Showa components.
“Sometimes it is better as a rider not to have options because you can choose the one you know, the safe one.” McGuinness said.
“We have to go faster so we have to change and if we can find a little bit more power, which we think we can, then I will be happy.”