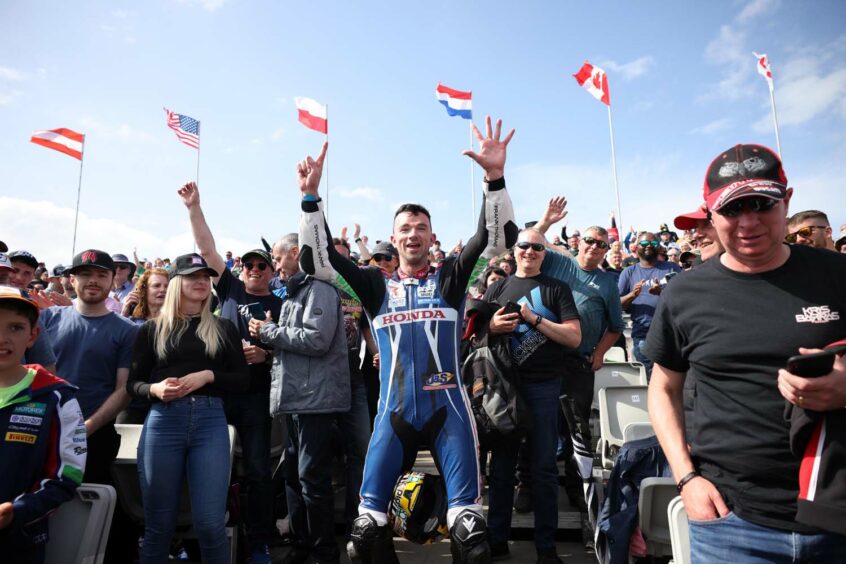 Glorious sunshine saw huge crowds descend upon the north coast on Saturday to watch Glenn Irwin claim a Superbike race double on his Honda Racing Fireblade during the main day of action at this year’s fonaCab and Nicholl Oils North West 200.

“I’m in love with the North West 200.” the Carrickfergus rider declared as he extended his superbike winning streak to a record breaking six consecutive wins at the event on the Honda Racing Fireblade with victories in the Anchor Bar and Merrow Hotel and Spa Superbike events.

“We are on the limit out there in what was the fastest superbike race ever.” Irwin said after the opening six lapper.

Rubber would play a major factor in the outcome of the second superbike event as tyre manufacturer, Dunlop, discovered a fault in a batch of their superbike-spec slick tyres.

“I was a bit more relaxed and controlled in that one.” Irwin smiled after his ecstatic post-race celebrations amongst the fans in the grandstands.

“The last lap was so special and I was trying to wave to everyone and acknowledge all the support which was incredible. This is such a special place.”

Northern Ireland’s Alastair Seeley and Lee Johnston also enjoyed a good day out at the seaside during this year’s North West.

Seeley added a second Superstock race win on the IFS Yamaha to the Stocker and Supersport victories he claimed during Thursday evening’s wet races.

“I got a good start but then the two Hondas of Glenn Irwin and Davey Todd came past before they ran on at University.” he explained.

“I led before Michael Dunlop came past and flicked up a stone that broke my screen. I pushed on, started to see a gap on my boards and took the win. That’s three in a week so big thanks to the IFS team.”

The Tides Restaurant Supersport race developed into a titanic battle between Lee Johnston (Ashcourt Racing Yamaha) and Davey Todd (Milenco Padgett’s Honda) as the pair swapped places throughout the six lapper. The Fermanagh man got the better of the Saltburn on Sea rider at Juniper chicane on the final lap, taking the chequered flag by just 0.079 seconds.

“We both made a little bit of a mistake at different times which prevented us from being able to gap each other.” Johnston explained.

“Davey is riding really well and he is strong on the brakes but I left it as late as I could at Juniper and still be safe on the last lap. It is great to get another North West win, especially in this weather and with huge crowds. The bike was awesome so huge thanks to my Ashcourt team.”

Todd’s second place was his third runner-up finish at the meeting after finishing behind Alastair Seeley in both Thursday night’s Supersport and Superstock races. He had the consolation of setting a new 600cc lap record at 118.036mph in Saturday’s Supersport race before going on to finish second yet again in the opening Superbike event.

Richard Cooper thought he had claimed his first wins around the 8.9 mile Triangle circuit on the Ryan Farquhar-built JMC Roofing Kawasaki. The Englishman had set a new lap record for the class at 111.580mph in the Milltown Service Station Supertwin race which was run on Saturday morning after being called off on Thursday evening because of adverse weather conditions.

Cooper also finished the JM Paterson Supertwin race in first place later in the day but he was subsequently disqualified from the results of both races after a modification to the frame of the JMC Roofing ER6 was deemed to be against the rules by the stewards of the meeting.