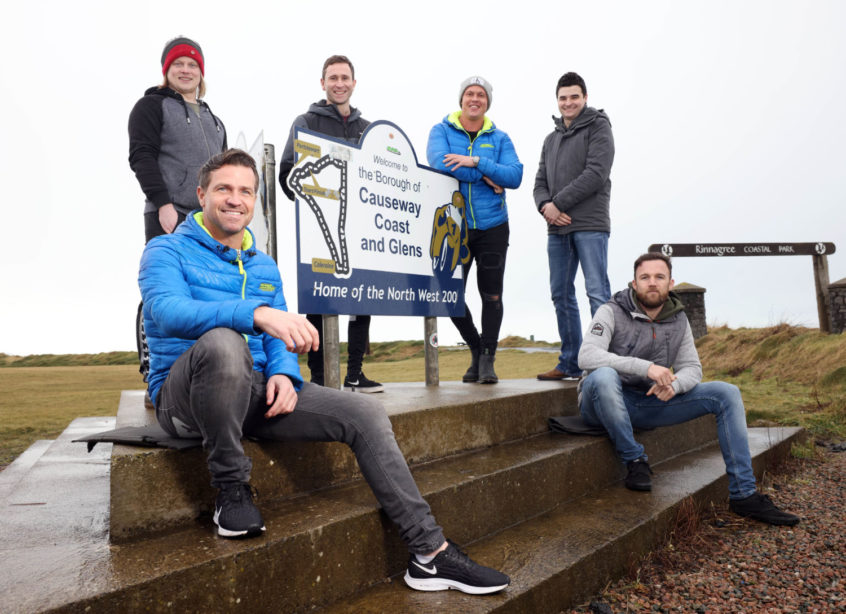 Former BSB star James Ellison headlines a list of newcomers who visited the North West 200 circuit today ahead of making their debuts at the 2022 fonaCAB and Nicholl Oils sponsored event.

“I have been watching onboard laps every morning.” the Leicestershire based racer smiled.

“Station corner seems daunting and I think it will blow my mind. The rest of the circuit looks fun too and I can’t wait to get here.”
Ellison last raced in the Le Mans 24 Hour event during 2020 but he has been keeping his hand in teaching during track days. In May he will ride a Hawk Racing prepared superbike spec GSXR 1000RR Powerslide Suzuki in both Superbike events.

“I prefer superbikes although superstock bikes are more forgiving as they aren’t as harsh to ride.”

Ellison will share a garage on the coast road circuit with Brad Clarke who will also make his North West debut. Ellison is the manager of Clarke’s Powerslide Suzuki BSB squad. A former British Superstock championship runner, the 40 year old will ride a GSXR Suzuki in the stocker events in May.

“I want to come and do a good professional job with the team although most of the expectation will be on James rather than me.” Clarke said.

“I just want to be competitive and go home in one piece!”

Cookstown’s Gary McCoy was the only local rider amongst the six newcomers getting their first view of the Triangle course today. The 26 year old, who was the only rider to beat Alastair Seeley during the 2021 USBK Supersport series, will ride a Ryan Farquhar prepared Kawasaki in the Supertwin races and a Michael Dunlop-built R6 Yamaha in the 600cc events under the MadBros banner.

“It’s something I’ve always wanted to do since watching the North West as a youngster.” McCoy said.

“It’s the biggest event in Ireland that everyone goes to. It will just take a bit of time to get used to.”
Julian Trummer made the long trip from his home in Austria to view the north coast venue. Already a veteran of the Manx Grand Prix, TT and IRRC series, Trummer will race in the Superstock, Supersport and Supertwin races at the NW200 on WH Racing machinery.

“I am coming with no pressure on me.” the 30 year old smiled.

“I just want to learn the track and enjoy myself. Some parts like the chicanes and long straights may be easier to learn than the TT but maybe the high speeds will be a big challenge.”

Josh Daley has also competed at the TT and Ulster Grand Prix but the Wigan rider, who will make his NW200 debut this year, has wanted to compete on the Triangle course since visiting as a spectator in 2018.

“I will race a ZX10 Kawasaki in both the Superstock and Superbike races. My main aim is to qualify, then be safe and enjoy myself.”

Manxman, Michael Evans was the best newcomer at the 2016 Manx Grand Prix and just a year later he won both the Junior and Senior MGP races. The following season he made his debut at the TT, finishing 17th in the second Supersport race.

“I will be racing a superstock spec S1000RR BMW, a R6 Yamaha and an ER6 Kawasaki at the North West for Heatech Racing.” the 28 year old said.

“I’ve wanted to do the North West for a long time and I’ve been here as a spectator. I am now here to race. It is one of the big three road races. It looks interesting but it might be different at 200mph. I think it will be an eye opener on the first couple of laps.”