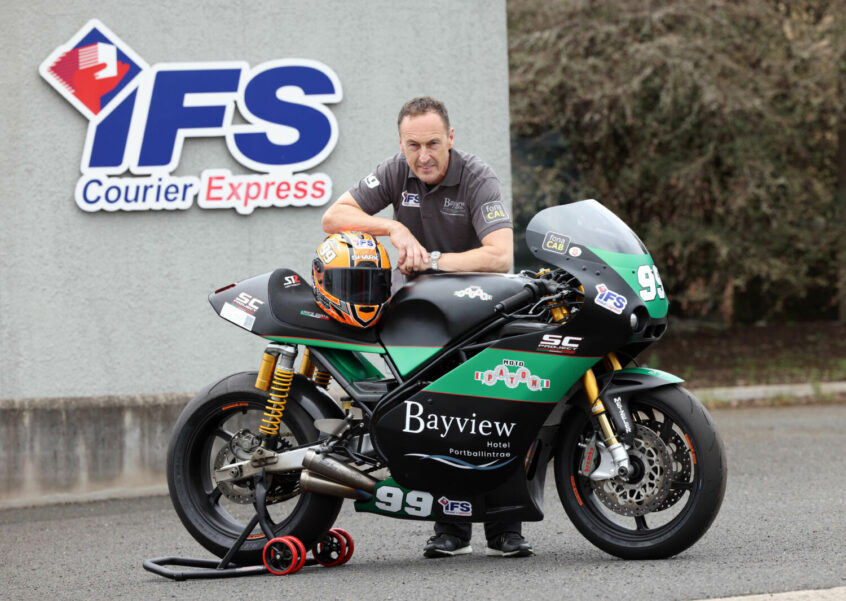 Former Grand Prix star and three time North West 200 winner, Jeremy McWilliams, will return to the fonaCAB and Nicholl Oils North West 200 on May 8-14 on a new machine as he chases another Supertwin race win at the event.

McWilliams won the Saturday Twins race in 2019 aboard Ryan Farquhar’s KMR Kawasaki. His two previous NW200 victories had also come on Farquhar’s machinery in the same class but this year the Newtownabbey man will swap the KMR ER6 Kawasaki for an IFS/Bayview Hotel Paton.

“I did consider riding Ryan’s bike again and I would do so in the future but it is just the way things have worked out.” McWilliams explained.

“During lockdown not much was happening and Ryan wasn’t sure what he was doing. The rules for the Supertwin class have been changed recently and that has definitely shaken up all of those teams that are using 650cc engines. Graeme Hanna from IFS bought a Paton and told me if I wanted to use it, I could work away.”

The Paton will also be backed by ardent road racing supporter, Trevor Kane, who owns the Bayview Hotel in Portballintrae. McWilliams rode the new bike for the first time during a USBK meeting at Kirkistown last July, taking two wins on the Italian machine.

“My time at Kirkistown wasn’t under the fastest lap I had set previously on Ryan’s bike but now the North West has returned we have decided to give the Paton a run and see how it performs.” McWilliams explained.

“The Patons were strong in 2018/19 but the rules have changed since then and we will just have to suck it and see.”

Two more race wins on the Italian twin during the recent opening round of the 2022 USBK series at Bishopscourt will have reassured the Newtownabbey rider he has made the right call as he aims for a fourth Twins victory in the Milltown Service Station and JM Paterson backed events on Thursday and Saturday at the 2022 NW200.

“There is nothing as special as riding into that winner’s enclosure with your whole team waiting to meet you.” the 58 year old says.

“My age has given me an extra motivation because I am almost always battling against somebody half my age or less who is also trying to get in there.”

McWilliams, who recently received huge acclaim after winning the Baggers race at Daytona, is undaunted in his North West 200 ambitions despite suffering two crashes during practice and racing at the 2019 event.

“There is a risk at the North West but you could say that about the walls at Daytona or Cartagena where Glenn Irwin had a big crash during testing a little while ago.” he explains.

“You don’t ignore it but you ride accordingly, trying harder to make up time where it is safer. Racers don’t think of the negatives, we always believe that with the right preparation and mindset, everything will be 100%.”

McWilliams is also looking forward to experiencing the unique atmosphere of the north coast event after the three year break.

“The North West 200 isn’t only about racing and winning.” he says.

“It’s also about being able to meet and chat with the people who want to give you a handshake or a good luck message, or even a pat on the back. Through most of my racing career almost no-one was allowed into the paddock but at the North West we meet everyone who comes to experience the event.”

PACEMAKER, BELFAST, 14/4/2022: Jeremy McWilliams with the IFS/Bayview Hotel Paton he will race at the 2022 North West 200.
PICTURE BY STEPHEN DAVISON