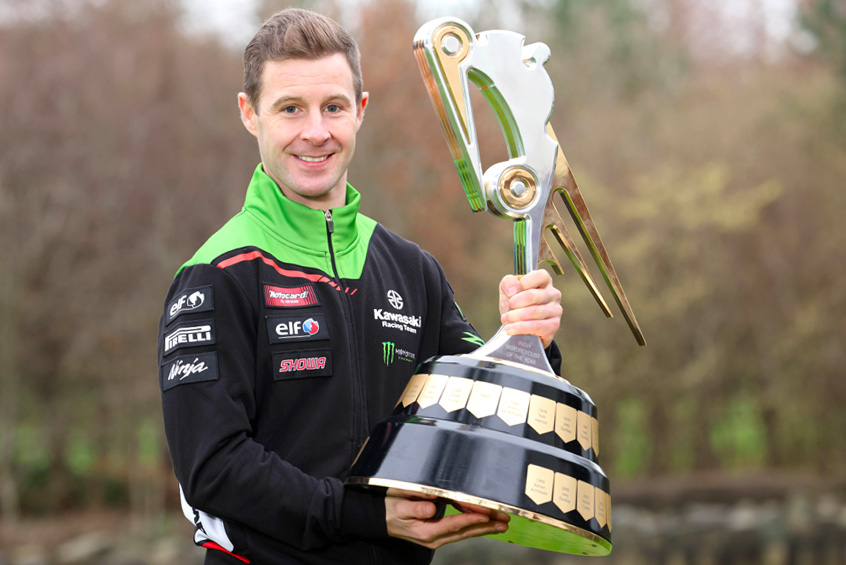 World Superbike star Jonathan Rea is the Adelaide Irish Motorcyclist of the Year for a record breaking ninth time.

The 34-year-old surpasses the record held by the legendary Joey Dunlop, who was an eight-time winner between 1979 and 2000.

It Is also the seventh time in a row that Rea has lifted Irish motorcycling’s top honour.

There was little doubt that the Kawasaki rider would scoop the main prize following his second place finish in this year’s World Championship.

“This is incredible,” said Rea. “To beat the record set by Joey Dunlop is simply unreal. He was my hero growing up and to think I have now won this award once more than him is hard to believe.”

“The Dunlop and Rea families have a great connection as my grandfather was one of the Joey’s first sponsors. To this day for me to even be mentioned in the same breath as Joey Dunlop is very humbling, as he was one of the greatest sporting ambassadors this country has ever had.”

As the annual gala evening was unable to be staged because of the Covid-19 pandemic, Rea received the famous Joey Dunlop trophy at his home in Belfast with the presentation broadcast during a virtual awards ceremony.

“I am gutted I can’t receive this trophy on the night,” continued Rea.
“It’s such a wonderful occasion every year when all the motorcycling industry come together under one roof.

“I receive so much support from the fans there and I will miss seeing them all. This is an incredible trophy with so much history which will once again take pride of place as the centrepiece in my home.”

Rea was pipped to the World Superbike title by just 13 points by winner Toprak Razgatlioglu, but is determined to get his crown back next year.

“I assure everyone I am planning a big assault on this new season. I am excited about the challenge, I am training hard and can’t wait to get going when the first round gets under way at the start of April in Spain.”

Five other awards were presented during the virtual awards which is available to watch on demand on the Bike Awards Facebook page and via YouTube. There are interviews with all the winners in the special programme hosted by Stephen Watson and Keith Huewen.

Teenager Cameron Dawson was presented with the Young Rider of the Year. He had a superb season producing seven race wins on his way to being crowned British Junior Supersport champion.

The Ireland team of Dean Dillon, Justin Reid and Mark
McLernon won the Off Road Award for their historic performance at the Quadcross of Nations in France. The trio finished ahead of the other fourteen countries to win the prestigious event for the first time.

Hitachi KTM fuelled by Milwaukee won the team award for their triumph in the British MX 2 Championship. Led by team principle Roger Magee, it was the Northern Ireland team’s thirteenth British motocross championship win since 2008.

The Irish motorbike awards are sponsored by Adelaide Motorbike Insurance, administered by Cornmarket. To celebrate the continued partnership the company is giving the chance to win a Dainese D-Mach backpack. Simply like and follow the Adelaide Motorbike facebook page, tag three friends and share the post.