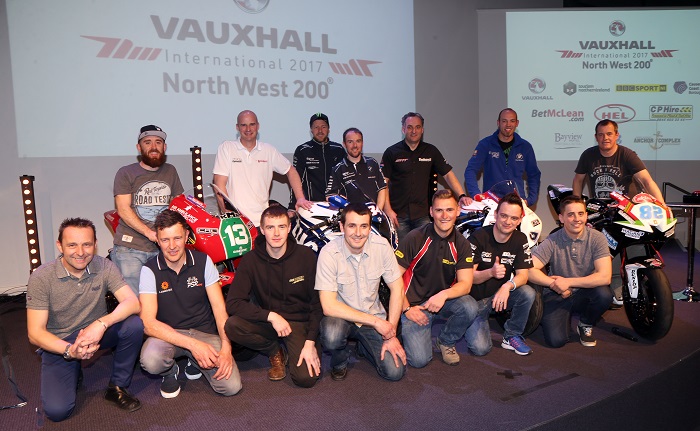 Over 1000 road race fans joined a stellar line-up of the sport’s finest talent to launch the 2017 Vauxhall International North West 200 in Coleraine on Wednesday (15 March) night.
17 times winner and all-time North West 200 record holder Alastair Seeley joined John McGuinness, Michael Rutter, Lee Johnston, Peter Hickman plus former NW200 winners Ryan Farquhar and Phillip McCallen to launch the May 7-13 race festival and meet local fans face to face.
Seeley, who carried his week old daughter, Olivia Grace on stage, confirmed he will race Superbike and Superstock S1000RR BMWs at this year’s event for the Tyco BMW squad he last rode for in 2015. Supported by Charles Hurst Vauxhall, Seeley announced he now has his sights set on capturing Phillip McCallen’s podium record. McCallen, who remains the only man to win five North West 200 races in a single day, has 28 rostrum finishes to the Carrick rider’s current tally of 27.
North West 200 Event Director Mervyn Whyte MBE announced a reshuffle of Saturday’s race day schedule with the feature Vauxhall Superbike race moving to the penultimate slot ahead of the CP Hire Superstock event.
Road race veteran Ryan Farquhar unveiled his team’s new Supertwin spec ER6 Kawasaki painted in the colours of the Northern Ireland Air Ambulance service. Farquhar, who was airlifted to hospital after crashing at the 2016 event, will debut the bike at the North West 200 in May with Lee Johnston in the saddle.
“It has been great to launch the 2017 races in the local Causeway Coast and Glens borough.” Mervyn Whyte said.
“We try to deliver the message about the North West 200 and the beautiful North coast to audiences all over the world but we also want to thank the local Council and all of the people and businesses in the area who support the event. With the line-up of great talent and so many top names on new machinery for 2017 plus our loyal sponsors on board the Vauxhall International North West 200 promises to be more exciting than ever.”