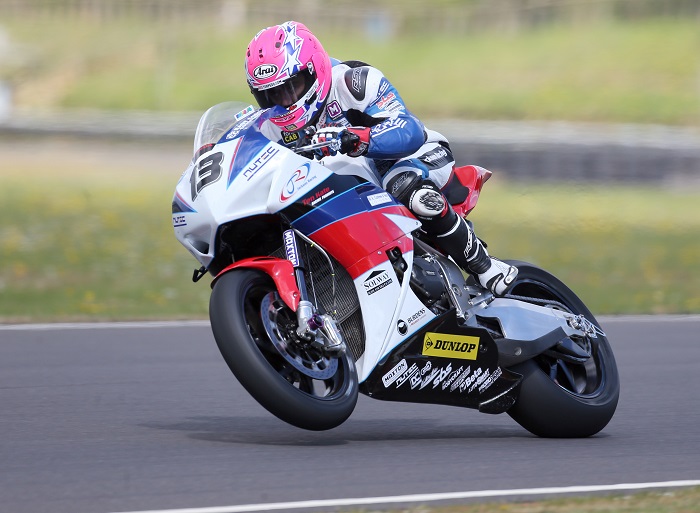 Lee Johnston is raring to go at the 2017 Vauxhall International North West 200 after completing his final test on the Jackson Racing Hondas.
The Fermanagh man brought his preparations for the new season to a close at the official Honda test at Castle Combe this week.
“I am really looking forward to the start of practice for the North West now.” he smiled.
“I love racing at home and because the North West is the first meeting of the year you get to see what everyone else’s form is like too!”
The 28 year old concentrated on his Ten Kate built 2016 spec Honda Fireblade superbike at the Wiltshire test session but he will also race in the Supersport, Superstock and Supertwins classes at Portrush.
“I have led most races at the North West at some point and there is no bike that I dislike so I will be trying to win in every race.” Johnston explained.
“A lot of people have been putting in a lot of effort to give me good bikes and I want to do well for them and for myself.”
The Maguiresbridge man, who is now based in England, will ride a CBR600RR Honda in Jackson Racing colours in the Supersport class but will return to BMW power for his Superstock challenge.
Johnston rode the S1000RR he steered to victory in the 2015 North West 200 Superstock race at last weekend’s Scarborough Spring Cup races after bringing the mothballed East Coast Construction machine out of retirement.
“I took the old bike out of my boss’s office to race at Oliver’s Mount.” he explained.
“I don’t have a contract with Honda and they can’t supply me with a new SP2 Fireblade so I have no option but go this way.”
His appearance on an NI Air Ambulance liveried KMR Kawasaki in the Supertwins events at the North West will be especially emotional for both the Fermanagh racer and KMR team boss, Ryan Farquhar following the Dungannon man’s crash at last year’s event.
“It will be really special to ride the little Kawasaki and I would really like to win for Ryan.” Johnston says.
“He is as keen as could be for me even though he isn’t riding the bike himself.”
So who does he think will provide the main opposition at the 2017 North coast event?
“Glenn Irwin will be really competitive.” Johnston says.
“He was the last time he rode there in 2015 and there is really only Glenn and Peter Hickman who are capable of running at the front on the roads and in the BSB championship.”
“Ian Hutchinson and Alastair Seeley will be right up there too and neither of them will want to be beaten by their teammate! There are so many other men who are capable of winning this year; John McGuinness, Dean Harrison, James Hillier, Bruce Anstey, Conor Cummins, Michael and William Dunlop plus riders like Derek Sheils could surprise everyone on the day.”
“Coming second doesn’t pay the mortgage so everyone will be wanting to win.” he laughs.
So what result would leave him driving home a satisfied man from Portrush on May 13?
“I would really like to win a Superbike race.” he says.
“It is the race that everybody is in and that everybody wants to win.”