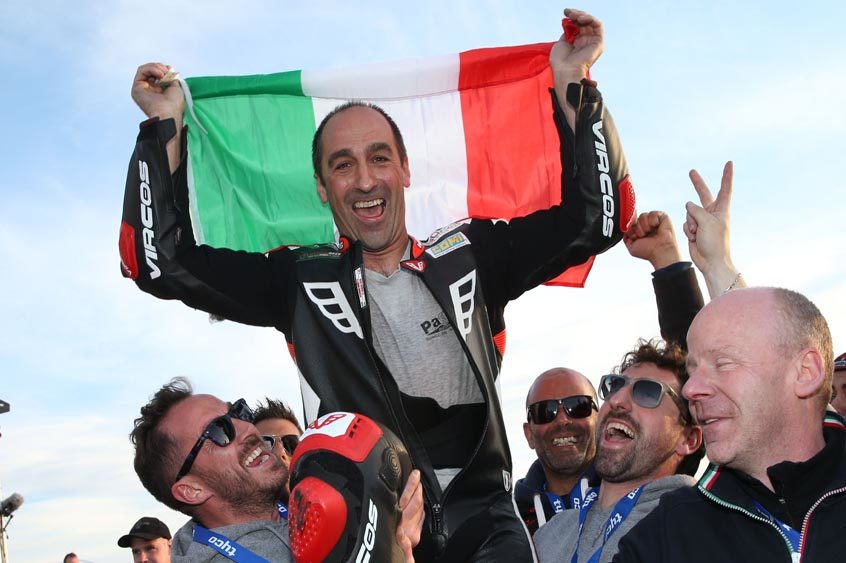 Three races produced three different winners during the first evening of racing at the fonaCAB International North West 200 in association with Nicholl Oils.

It was Johnston and Seeley though who led that train on to the coast road on the final circuit, with Seeley going for the winning move as he has so many times before at Juniper chicane. He got his nose in front but carrying a little too much speed the Carrick racer lost control and crashed leaving Johnston to cruise to victory ahead of Dean Harrison and James Hillier.

‘There is a reason why Seeley has won so many races round here and it’s hard to know when he is playing and when he is not.’ Lee Johnston said after taking his fourth North West victory.
‘His mid corner speed over Black Hill was slow for him and I didn’t know whether he was playing with me. I thought I’m going to go and whatever happens, happens. I knew exactly where my braking marker was and I knew that if he got past he wasnt getting stopped.’

Seeley was uninjured after his tumble and walked back to the paddock.

After the hectic action of the 600cc machines the Bayview Hotel Superstock race was more of a procession as Peter Hickman dominated the six lapper from start to finish on the Smith’s Racing BMW, eventually winning by 1.895 secs from Glenn Irwin (Quattro Plant/Wicked Coatings Kawasaki). Irwin had been locked in a battle with Silicone Kawasaki’s Dean Harrison until the Bradford man slid off at University on the fifth lap.

Michael Dunlop (MD Racing BMW) came out on top of a three man battle with James Hillier (Quattro Plant/Wicked Coatings Kawasaki) and Lee Johnston (Ashcourt Racing BMW) for the final podium place, receiving a huge cheer from the grandstands for his efforts.

‘I have been fast on the Superstock bike all week for some reason.’ Hickman explained.

‘Its a brand new bike and I had never even sat on it before Tuesday. The boys have done a great job and it worked straight out of the box. I just wanted to get to the front as soon as I could and just get my head down and get on with it. if I could just get that half a second out of the slip stream then I knew I could get a little bit of a lead.’

With the sun low in the sky, Jeremy McWilliams (KMR/ Bayview Kawasaki) bounced back from his earlier crash during qualifying to force his way to the front of the pack on the opening lap of the MCL Insuretech Supertwins race. But on the second circuit the former MotoGP star crashed out at Mather’s chicane on the second circuit, leaving Stefano Bonetti (VAS Engine Racing Paton) in the lead. Over the second half of the race the Italian was hunted down by Jamie Coward who had posted the fastest time in qualifying aboard the KTS Racing Kawasaki.
Coward took the lead at University but Bonetti got the Paton back in front along the coast road to take victory.

‘Winning my first international road race is better than winning the lottery.’ Bonetti said after giving Italy it’s first North West 200 victory and bringing the opening day of race action at the 90th anniversary event to an emotional close.