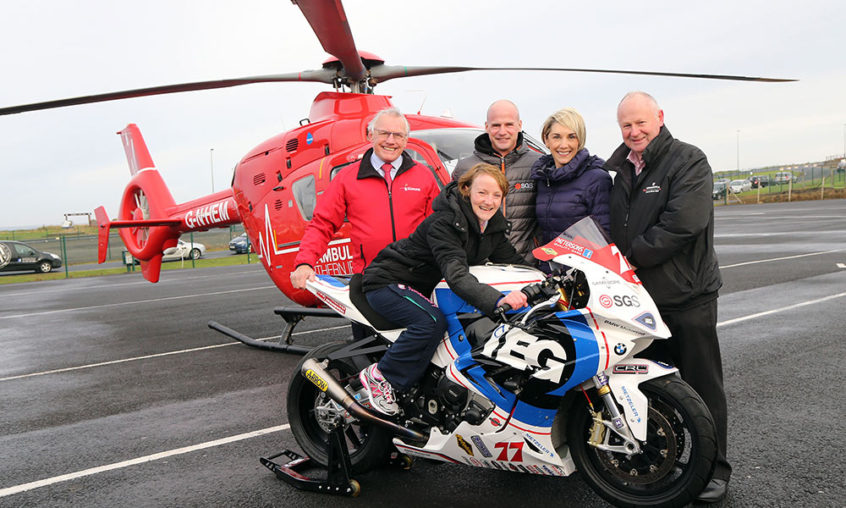 Amongst those who greeted the new aircraft were Violet McAfee, the spectator who was injured in a crash at the race in 2015 and road racers, Ryan Farquhar and Ian Morrell, who are recovering from injuries sustained in racing crashes. All three were transported by non-medical helicopters to hospitals in Belfast after their accidents.

“It is absolutely fantastic to have this helicopter service now and I am so glad to be able to be here to see it.” Violet McAfee, who sustained serious leg injuries after being hit by a crashed bike, said.

“It is just a pity that Dr John Hinds wasn’t here to see it too.”

Dr Hinds, a member of the MCUI Medical team who treated Violet, was a leading campaigner for the introduction of a HEMS facility in Northern Ireland before he lost his life at the Skerries 100 road races in 2015. The need for air transport in getting Violet McAfee and Ryan Farquhar to hospital and Dr John’s work are seen as having had a crucial influence in finally securing the provision of the helicopter service.

“Lives will be saved with this service.” Dungannon ace Farquhar said.

“I know at first hand because there is a good chance that I would not be here today if it wasn’t for a helicopter being there after my crash to take me to hospital.”

A PSNI helicopter transported Farquhar, who was seriously injured during the Supertwins race at the 2016 meeting, and Violet McAfee was taken on a Coastguard aircraft after suffering serious injuries in 2015.

Portrush rider Ian Morrell was also transported to hospital by helicopter after being seriously injured in a crash at Kells road races in Co Meath in 2015.

“Lives will be saved with this service.” Dungannon ace Farquhar said”

“We wanted to bring the first HEMS helicopter to the North West 200 paddock to let people in this area see the new helicopter.” Ian Crowe, Chairman of Air Ambulance Northern Ireland said.

“We have had so much support from the motorcycling community and the new service will be here for the benefit of everyone in Northern Ireland.”

It is understood that the facility will come into operation early in 2017.

“We have seen the importance of having an airborne medical service over the last two years and this new helicopter is a huge milestone for emergency medical care in Northern Ireland.” NW200 Event Director, Mervyn Whyte said.

“The motorcycle racing community has provided strong support for the service and although we all hope that none of our races will have to avail of the service in 2017, it is reassuring to know that we have this facility available if it is required.”