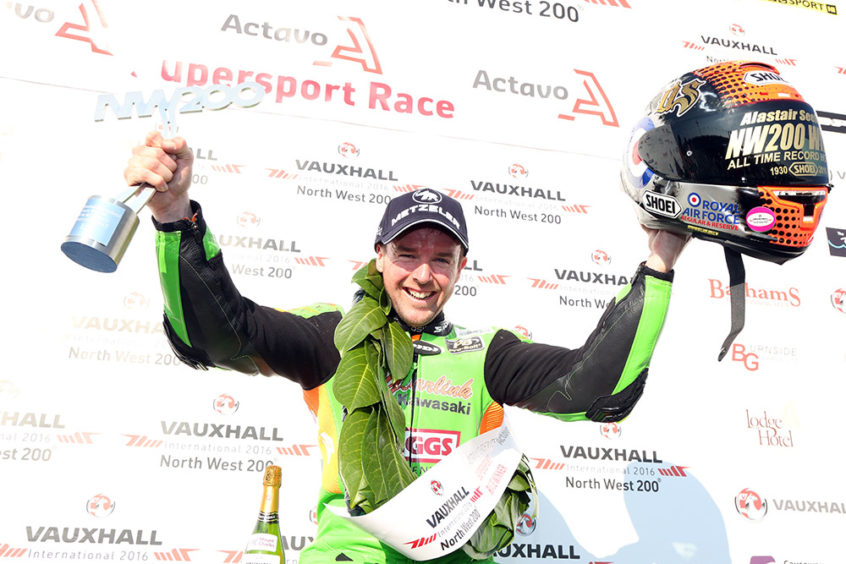 The Vauxhall International North West 200’s most successful racer, Alastair Seeley, says he will ‘definitely’ be in action at the 2017 event.

The 17 times North West winner, who overhauled Robert Dunlop’s previous record tally of 15 victories with a Supersport double on the Gear Link Kawasaki last May, is currently seeking a British championship ride for next season after his contract with the RAF Reserves/Briggs BMW BSB squad was not renewed following a troubled 2016 season. But the 37 year old is certain his NW200 record will guarantee him competitive machinery for the seaside races.

“Who wouldn’t want the current record holder on their bikes?” Seeley says.

“I’ve already had offers from a few teams of bikes for the North West but the British championship is my bread and butter and I want to get that sorted first.” he explains.

With the North coast event being his only roads outing of the year, the diminutive Carrickfergus rider wants to secure a British championship deal before slotting the Portrush event into his plans. He is now chasing a ride in either the Supersport or Superstock classes for 2017. Seeley won the 2009 British Superstock championship and the 600cc series in 2011, both on TAS Suzukis.
Although he is confident he will secure a deal, the 37 year old says he is frustrated by the demands team bosses are now making on riders in the British series.

“More and more teams want riders to bring money to the team now.” he explains.

“I’ve always been a regular podium finisher and fighting for the championship in both classes. After winning two British championships and being runner up three times I didn’t think I’d be in the position of having to buy a ride now by bringing money to the table. But I am open to offers.”

Seeley is determined to add to his North West 200 trophy haul but with new superbikes set to appear on the grid from both Honda and Suzuki in 2017 the 37 year old feels the competition at Portrush will be tougher than ever next May.

“There will be a big shake-up in the 1000cc class next year.” Seeley says.

“BMW have had the advantage recently with Kawasaki not far away but in 2017 Honda and Suzuki will be in there and it isn’t clear at the moment which bike will be the one to be on.”

Admitting he is tempted by the prospect of riding for a new manufacturer, the hugely experienced North West star is also cautious about diving into unknown territory.

“With the North West coming so early in the year it would be important to get a new bike developed and dialled in as quickly as possible.” Seeley says.