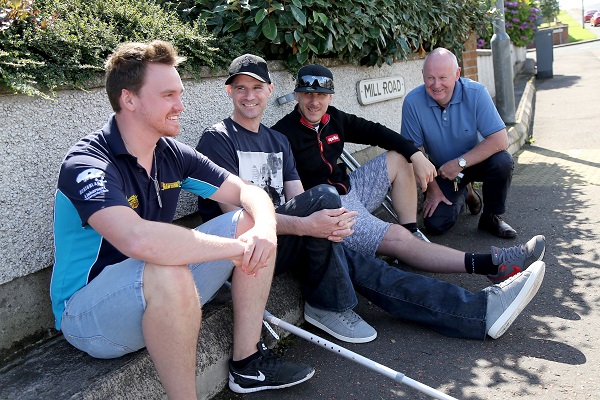 Top road racers Ryan Farquhar, Ben Wilson and Nico Mawhinney have returned to the Vauxhall International North West 200 circuit were they were injured during the 2016 event.

40 year old Farquhar suffered a lacerated liver and was in Intensive Care for two weeks after a crash during the Thursday evening Supertwins race at the Dhu Varren section of the course. During his visit to Portrush he reflected on what had happened and vowed to return to racing.

“I hurt my self pretty badly but Malachi’s crash puts it into perspective.” he said, referring to the death of Malachi Mitchell Thomas in a crash at the same spot just two days later.

“I am hoping not to have to hang my leathers up under these circumstances. I am determined to get my racing licence back and to race again. My career is not finished yet.”

Farquhar discussed possible safety improvements with Event Director, Mervyn Whyte MBE, to the north coast circuit along with English rider, Ben Wilson and Magherafelt’s Nico Mawhinney who both crashed at the Mill Road roundabout in Portstewart.

“The surgeons have sorted my leg out now and I hope to get back on the bike as soon as I can.” Wilson said after suffering a broken femur.”

23 year old Mawhinney was a newcomer at this year’s North West when he broke his pelvis, ankle and heel in his practice crash. His priority now is to return to British championship action.

“But I will never say never to a North West return.” he smiled.

“It is great to see all three of these guys back on their feet and returning to the North West 200.” Whyte said.

“Ryan, Ben and Nico know better than anyone the dangers of road racing and we really value their support and advice as we strive to improve safety around the track. They still have some way to travel with their own recoveries and everyone at the North West wishes them well with that.”