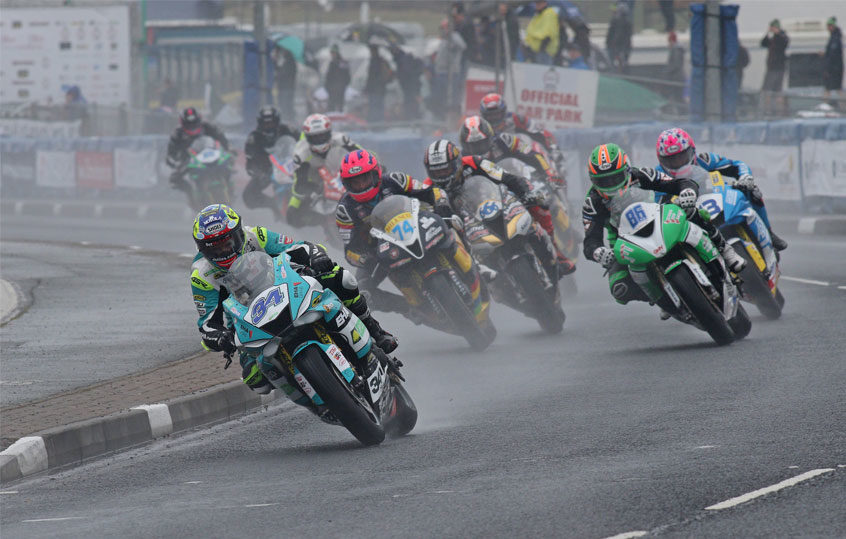 It has been a tough day at the office so far for the organisers and competitors at the 2019 fonaCAB International North West 200 in association with Nicholl Oils.

After dry and sunny weather throughout practice and qualifying on Tuesday and Thursday, heavy skies hung over the north coast on Saturday morning with heavy rain falling around the 8.9 mile Triangle circuit.

As the action was about to begin after roads closed at 9.15am, a helicopter collided with electricity power lines in the Magherabouy area, causing a power cut in the vicinity. This would cause further problems later in the day.

Event Director, Mervyn Whyte, announced that there would be two practice laps before the opening event, the six lap Junction Retail and Leisure complex Supersport race.

With dry weather throughout practice the riders were also provided with time to make changes to their machines for the wet conditions. These two laps were to be followed by a sighting lap and six lap race.

Unfortunately, Daley Mathison crashed without injury on the sighting lap. There was a delay to allow the road to be cleared before the race began.

A second rider, David Murphy, slid off at Black Hill on the first lap of the race bringing out the red flags.

Event Director Mervyn Whyte was accompanied by riders James Hillier and Lee Johnston to inspect Black Hill and the road was cleaned.

Whilst the clean up was taking place the Fire Service and NIE were called to deal with an emergency at Heatherleigh which had been caused by a power surge following the helicopter collision with power lines earlier in the day.

After a lengthy delay a new sighting lap was called for a rerun of the Supersport race at 1.30pm, again on wet roads.

Several riders opted not to take part and Alastair Seeley was leading the race on the EHA Yamaha on the first lap when it suffered a mechanical failure on the approach to University corner, depositing oil on the track.

Spanish rider Victor Lopez became the third rider to crash at Black Hill behind, bringing out the red flags once again.

A clean up operation is being completed at University and Black Hill and racing is expected to resume shortly.