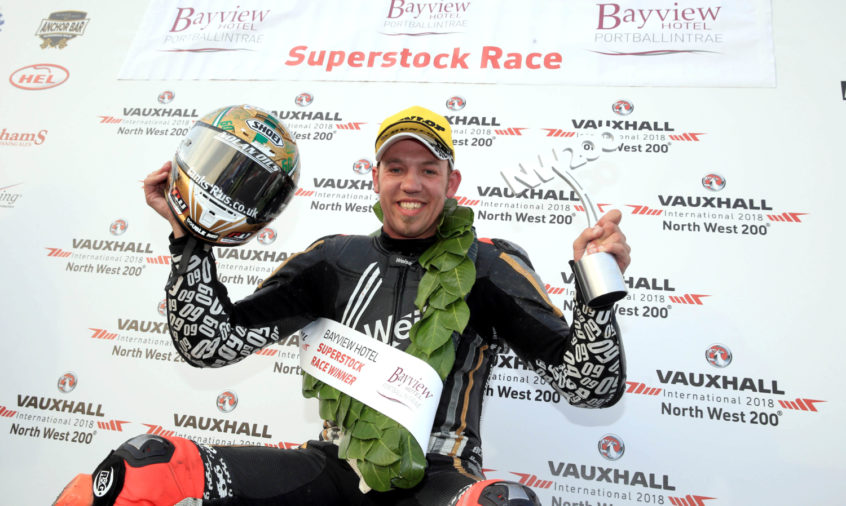 WORLD’S FASTEST ROAD RACER, PETER HICKMAN, BLASTS OFF HIS 2019 SEASON AT THE fonaCAB INTERNATIONAL NORTH WEST 200 IN ASSOCIATION WITH NICHOLL OILS ON MAY 12-18.

The world’s fastest road racer, Peter Hickman, gets his 2019 between the hedges season under way at the fonaCAB International North West 200 in association with Nicholl Oils on May 12-18.

After a stellar 2018 in which the 32 year old clinched his maiden North West 200 victory in Thursday’s Superstock race and won the Superstock and Senior TTs. Hickman also set a new outright lap record of 135.452mph on his way to winning the Senior, eclipsing Dean Harrison’s previous world’s fastest mark set at Dundrod’s Ulster Grand Prix in 2017. The Burton on Trent racer intends to pick up where he left off in 2018.

‘I will have done the opening two BSB rounds before I come to the North West so I should be up to speed and ready to go hopefully.’ Hickman said.

The 32 year old will ride BMW S1000RRs for the Smith’s Racing squad in both the Superbike and Superstock events at Portrush plus a Trooper Beer Triumph in the Supersport races. With that Superstock win under his belt after a titanic battle with Alastair Seeley twelve months ago, Hickman is full of confidence for this year’s stocker races.

‘It was really cool to get my first North West win.’ he recalled.

‘I have been close a few times in Supersport and stocker races but it hadn’t happened and then it all came together last year.’

His appearance at the North West heralds the start of Hickman’s road’s season.

‘I haven’t ridden my BMW stocker or the 675cc Triumph since last year’s Ulster Grand Prix and although I have ridden the superbike it wasn’t on the roads.’ he explained.

‘Last year the bikes were the same as the year before, making it easier, but this time around the BMW have a new model and that will probably make things harder.’

Delays in the delivery of the new S1000RR BMW have meant Hickman’s superbike preparation in particular has been slower than he would have liked.

‘We only got our bikes 23 days ago which is very late and there are no parts available.’ he explained.

‘I hope to ride the superbike this week for the first time and I probably am at a bit of a disadvantage. We are just waiting on BMW and there isn’t anything I can do about that.’

The Smith’s Racing team will also be limited to blueprinted stock engines rather than factory prepped superbike engines for the North West. Hickman recognises this might leave him struggling for power against some of the superbike opposition around the high speed 8.9 mile Triangle in May.

‘I think the men to watch will be the same people I have been up against every year at the North West.’ He said.

‘Alastair Seeley, Glenn Irwin, Michael Dunlop and Dean Harrison will all be strong. Alastair has won a lot of North Wests and he will probably be the strongest as he is on the Ducati V4. He has got to start as favourite.’

Nevertheless, Hickman remains determined to add another NW200 win to his CV.

‘I am definitely not saying we are fighting a losing battle.’ he smiled.

‘The North West is like a BSB race on the road and you can go from first to fifth or fifth to first in an instant. That type of racing might actually help me as I will be able to use other people’s slipstream. I wont be looking at things any different than I ever do because I am always there to try and win.’