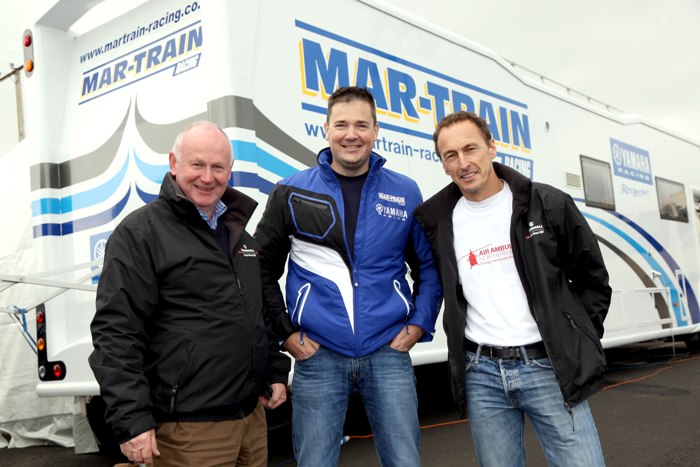 Former MotoGP star, Jeremy McWilliams is to replace Dan Kneen in the Mar-Train Yamaha squad at the 2016 Vauxhall International North West 200 this week after the 28 year old Manxman broke his arm in a mountain biking crash.

Double North West winner McWilliams will now ride the blue and white liveried R1 and R6 Yamahas for the Saintfield based squad. 51 year old McWilliams will be a busy man as he will also ride Ryan Farquhar’s SGS/ KMR Kawasaki in both Supertwins races as scheduled.

“It is nice to be able to step in for Dan and help the team out this week.” McWilliams said.

“ I have a great relationship with Tim and the team and have experience of working with them in the past. I’m keen to race the North West 200 with another professional outfit and my duties will be divided between SGS/KMR and Mar-Train during the week. I am looking forward to getting on the Yamahas to see how far they have come on over the past year.”

“McWilliams worked with the team in 2015, testing the R1 and R6 alongside Dean Harrison at the squad’s initial outings with the new machinery.

“Obviously I am disappointed for Dan that this has happened, we have had a fantastic build up to the event and I was confident he would have been very competitive.” Mar-Train boss Tim Martin said.

“It is nice to be able to step in for Dan and help the team out this week.” McWilliams said.”

“Thankfully the minor surgery he had today has gone very well, he is now on the road to recovery and we are hopeful he will be fit for the TT in a few weeks time. At this late stage there were not many options available to us so we are very lucky that we have been able to bring in someone of Jeremy’s pedigree. He was part of our test programme at the beginning of 2015 so has some knowledge of our bikes already, with no recent testing it will be a challenge but I am sure we can put on a good show for our fans and sponsors.”

It is understood McWilliams will test the Yamahas at Kirkistown on Monday ahead of North West practice on Tuesday.

Tandragee 100 winner Kneen is distraught at having to miss the opening international event of the season.

“I’m gutted for the whole team after all the work that has been put in, I’m on my bike every day and wasn’t doing anything different than usual, it was plain bad luck.” he explained.

“ Surgery has gone well today so all I can do is concentrate on getting fit and back on the bikes as soon as possible. I wish Jeremy all the best for this week, it is great that he has been able to step in for Tim, Sonya and all the sponsors.”

“We are disappointed that Dan Kneen wont be with us this year.” Event Director, Mervyn Whyte, MBE, said.

“Dan has been a regular competitor at the North West and we would like to wish him well with his recovery from this injury and for the rest of the season. Although the fans will be very sad to hear of Dan’s misfortune, they will now have the opportunity to see Jeremy McWilliams on the Mar-Train Yamahas. Jeremy’s appearances on Ryan Farquhar’s KMR/SGS Kawasakis has given him a huge following at the North West and he has the experience and knowledge to do a great job for Tim Martin’s team.”

Practice begins for the Vauxhall International North West 200 on Tuesday 10th with roads closing at 9:15am.