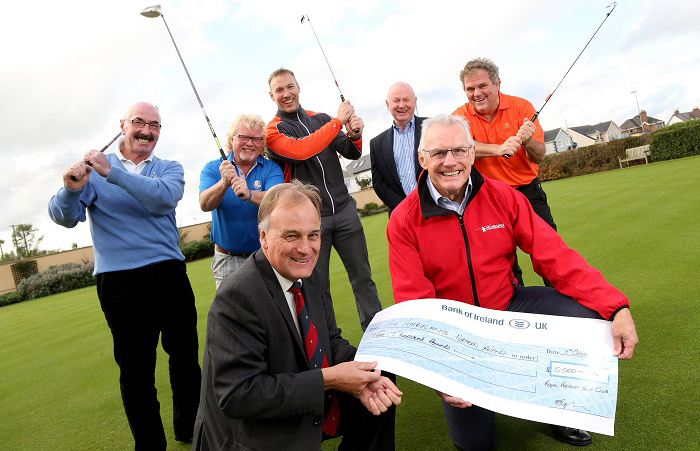 The Air Ambulance NI charity has received a cheque for £10,000 raised in a pro-am celebrity golf tournament held at Royal Portrush Golf Club during the Vauxhall International North West 200 race week in May, 2016.

“We are delighted to have been nominated as the chosen charity of the North West 200 in 2016.” Ian Crowe, Chairman of Air Ambulance NI, said after receiving the cheque.

“We are also delighted to receive this fantastic sum from Royal Portrush Golf Club and we are very grateful to everyone involved.”

“So many people put so much hard work into raising this money and it is a great pleasure to present this cheque to the Air Ambulance NI charity.”
Michael Taylor, the RPGC captain, said after the presentation.

“The provision of an air ambulance service is something that is very close to the hearts of everyone involved in the Vauxhall International North West 200.” Event Director, Mervyn Whyte, said.

“We are very pleased to have been able to be involved with this important charity in 2016 and will continue to support the service in the future.”