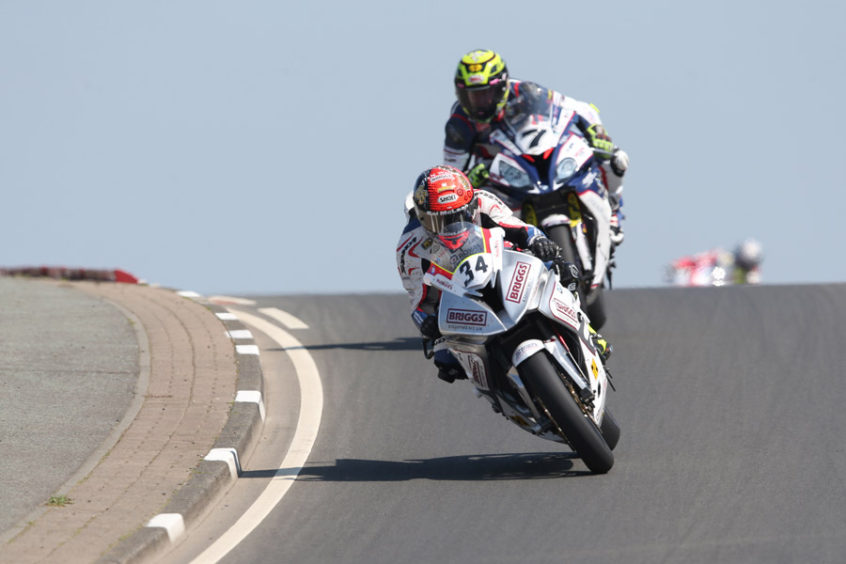 “We made some adjustments and it immediately felt better and with clear traffic on the second lap I set my fastest speed.”

The 36 year old pipped Michael Dunlop (Hawk BMW) by just 0.017 seconds just before the red flags came out that brought the session to a premature end after a rider crashed at Mill Road roundabout. He sustained non-life threatening injuries and was being taken to the Royal Victoria Hospital, Belfast by air ambulance.

“I went out at the start of the session and didn’t feel like I had much grip so I came in and changed from the harder to the softer tyre.” Seeley explained.

“We made some adjustments and it immediately felt better and with clear traffic on the second lap I set my fastest speed.

I can still tidy the bike up a bit because it isn’t 100% yet but we have laid a marker down and everyone likes to get P1.”

The Carrickfergus man was also fastest in the Superstock and Supersport qualifying on the Briggs BMW and GearLink Kawasaki, bettering the existing lap record in the stocker class.

Seeley is bidding to win his 16th North West after equalling the all-time record of the late Robert Dunlop last year. Robert’s son, Michael, is clearly determined to make Seeley work for that win and he topped the Superbike times for most of the session.

“We have a lot of little, niggly problems and we are working hard to rectify them but there are no major issues.” the Ballymoney man said.

13 times winner, Michael Rutter, proved he still has his sights set on more North West glory by taking the final front row place on his SMT/Bathams BMW. It was a good day for the Birmingham rider after he finished second in the Superstock session.

Hutchinson broke the 200mph barrier through the speed trap on his stocker spec Tyco BMW, the first time a superstock bike has been timed at that speed on the Triangle course.

Dan Cooper was the surprise pole position man on the Cooper Racing Kawasaki in the Supertwins category ahead of former Twins winner Ryan Farquhar (SGS/KMR Kawasaki) and Ivan Lintin on the Devitt/RC Express Kawasaki.

Racing in commences on Thursday evening with Supersport, Supertwin and Superstock events taking to the track after roads close at 5pm on.