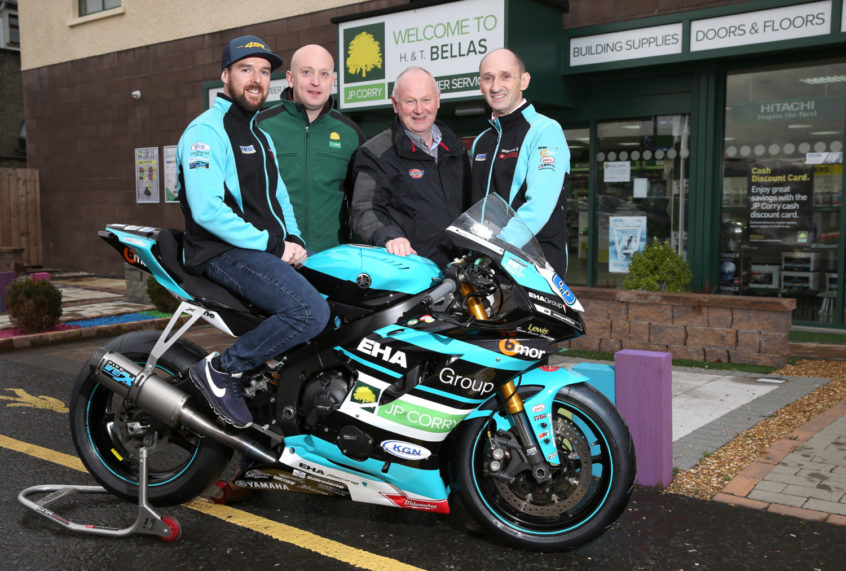 Alastair Seeley, the International North West 200’s most successful racer, will be reunited with the EHA Racing team as he chases his 25th victory on the North coast circuit at next year’s 90th anniversary event.

After claiming a 600cc double on EHA machinery at this year’s NW200 and agreeing terms to ride for the team in the 2019 British Supersport championship, the Carrickfergus rider will race an R6 Yamaha in the team’s livery at next May’s North West 200 supported by Coleraine building suppliers, J.P Corry.

‘I bonded well with the team and the bike last year and am delighted to have a deal sorted for the British championship which means I should hit the ground running coming to the North West.’ Seeley explained.

‘We will have the first two British rounds at Silverstone and Oulton under our belts by May and should be up to speed and have the bike well sorted.’

Now 39, Seeley has lost none of his hunger for North West success despite having already notched up 24 victories since his 2004 debut on the 8.9 mile NW200 Triangle circuit. His winning streak has been uninterrupted since his first success in the 2008 Superstock race and the diminutive star is confident about his 2019 prospects.

‘I am training twice a day, six days a week, to make sure I am as fit and sharp as I can be.’ Seeley explained.

‘I always think it is important if you can come to the North West carrying confidence from the British championship. I am going for the British title next season and if we can come to Portrush with a couple of podiums or wins under our belt it will be a big boost.’

‘We would love to be able to give Alastair his 25th win at the NW200.’ Allingham said.

‘It was mega for a small team like ours to win two races this year against all the top road race teams at such a prestigious event as the North West. That brought a lot of interest and local support for the team and our business and we would love to come back and repeat what we achieved in 2018.’

‘Alastair continued his winning ways at the North West with Eddie’s EHA team last May and it is great news that they will be back together again with local sponsor J.P. Corry for our 90th anniversary races.’ North West Event director, Mervyn Whyte MBE said.

‘As the man with more wins than anyone else at the North West, Alastair sets the standard that has to be beaten.’

Riding a Tyco BMW, Seeley claimed a treble at the 2018 meeting as he avenged a narrow defeat in Thursday evening’s stocker race in 2018 to Peter Hickman (Smith’s BMW) by winning Saturday’s Superstock event to maintain his big bike credentials at the North coast event. With his 600cc deal now sorted, the Carrick rider remains confident he will have top class machinery at his disposal for the 2019 NW200 Superstock and Superbike races.

‘I have a few offers on the table at the moment and I am not rushing into anything.’ he explained.

‘I am happy to be coming back to the North West on the EHA R6 Yamaha and am content to wait until the New Year to sort the rest of my rides. May is still five months down the line and everything will have slotted into place by then.’