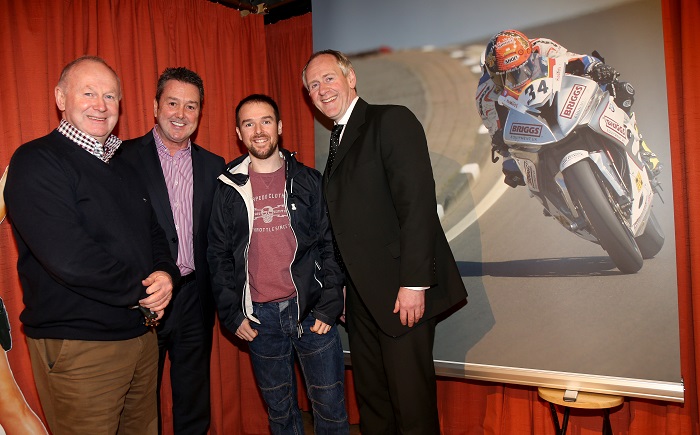 A new documentary telling the story of how Alastair Seeley became the Vauxhall International North West 200’s most successful racer is set to be released on DVD.

Made by local film maker, Colin James, ‘ALASTAIR SEELEY-MY NW200 WINS’ will be issued on February 1 and sold through the http://www.northwest200.org, the official website of the event.
The one hour, forty minute programme tells the inside story behind the Carrickfergus rider’s record 17 victories on the famous Triangle circuit.

The 37 year old made his debut at the North coast event in 2004 after a promising start to his bike racing career on the short circuits at home and on the British championship scene. His first podium came on a Vanfit Yamaha in the 2007 Superstock race, passing John McGuinness on the final lap for a second place finish.

A year later Seeley enjoyed his first taste of NW200 victory on the JMF Yamaha, making the first of what has become his traditional last lap passing manouevre at Juniper chicane to get the better of Relentless Suzuki duo Bruce Anstey and Cameron Donald.

For 2009 Seeley was racing in the famous black colours of the local TAS team and survived a huge 120mph crash on the approach to Mather’s to take victory in the Superstock class on the 8.9 mile circuit.

The diminutive star made history in 2010 by ending a 13 year drought of success for Irish riders in the main Superbike race. Riding the Relentless Suzuki, Seeley made a stunning pass on Stuart Easton on the approach to Church on the final lap of the race to become the first local rider to lift the winner’s trophy of the feature race for the first time since Phillip McCallen in 1997. The reigning British Supersport champion followed up by clinching the first of many 600cc NW200 victories.

2011 brought a second Supersport success in the last year of Relentless colours before the Carrick man clinched his first hat trick on the Triangle circuit in 2012 with wins in the Superstock, Supersport and Superbike classes on the Tyco Suzukis.

Seeley’s 600cc win that day came after another last lap dive on the approach to Church, this time against William Dunlop who complained bitterly that the move had been dangerous. Dunlop was so incensed he refused to shake Seeley’s hand in the winner’s enclosure after the race and the controversial incident is dealt with at length in the film, bringing together a host of opinions from fellow riders and pundits.

2013 saw Seeley take one of his greatest ever North West victories. Forced to start from the second group after a poor qualifying, the Gear Link Kawasaki rider fought his way through the field to beat Michael Dunlop on corrected time. Yet another Superstock win, this time on a MSS Kawasaki, saw him move his North West victory tally into double figures.

Seeley’s run of success meant he was now viewed as a serious threat to the late Robert Dunlop’s record tally of 15 Triangle course wins and 2014 brought him closer to the target with a Supersport win on the Mar-Train Yamaha. That Thursday evening success came after yet another epic ride. Relegated to 16th place after almost being skittled by Lee Johnston when the Fermanagh man crashed his Pirtek Honda on the opening lap at York, Seeley battled his way back through the field to take the victory.

With the Carrick racer following up his 600cc win with a Superstock triumph to make it a Thursday evening double for the second year in succession, Saturday looked ominous for the opposition. But another tangle with Lee Johnston ruined those hopes as the duo crashed out of Saturday’s Supersport encounter at Metropole after the pair banged into each other on the final lap. The injuries Seeley suffered ruined any chance of further success on the day.

For 2015 Seeley was reunited with the Tyco team but this time with BMW power in the big bike classes. As the German manufacturer did not make a Supersport machine the Moneymore team prepared a GSXR 600 Suzuki especially for Seeley’s usual Supersport onslaught and he repaid the favour by winning both races.

“Nobody is more determined to win than Alastair Seeley.” was the verdict of an obviously impressed Ryan Farquhar. The Carrick racer underlined his hunger by finally equalling Robert Dunlop’s 15 North West wins with victory in the feature Superbike race on the S1000RR BMW, scoring his second North West hat trick in the process.

A British champion in both the Superstock and Supersport classes and a regular competitor in the BSB series since 2009, the North West 200 is the only road race Alastair Seeley competes in each year. The documentary investigates this singular focus and the Carrick man discusses his preparation and race strategy in fascinating detail.

Seeley’s North West resolve came to fruition last season when a brace of victories in the Supersport class on the Gear Link Kawasakis allowed him to finally lay claim to the title of being the North Coast event’s most successful rider.

“It is a dream come true.” the Carrick man said simply after the historic achievement.
With the pressure of chasing the record now laid to rest what now lies ahead for Seeley in 2017?
“I have a deal for bikes sorted for the North West this year but nothing is signed yet.” he explained at a special viewing of the documentary on Wednesday.

“I still want to get a ride in the British Supersport or Superstock series and there are some offers out there and they would require a significant cash injection. But I will definitely be at the North West in May.”
Has Seeley any unfinished business at the sea side event?

“I have had two trebles at the North West and I would like to get a third.” he smiled.
“And of course there is Phillip McCallen’s record of five wins in a day that has stood since 1992. It would be great to equal that. I definitely want to go after Phillip’s other North West record of 28 podium placings. I have 27 so I think I can do it.”

After all of the success the Carrick rider has enjoyed at the famous old race who would bet against him?