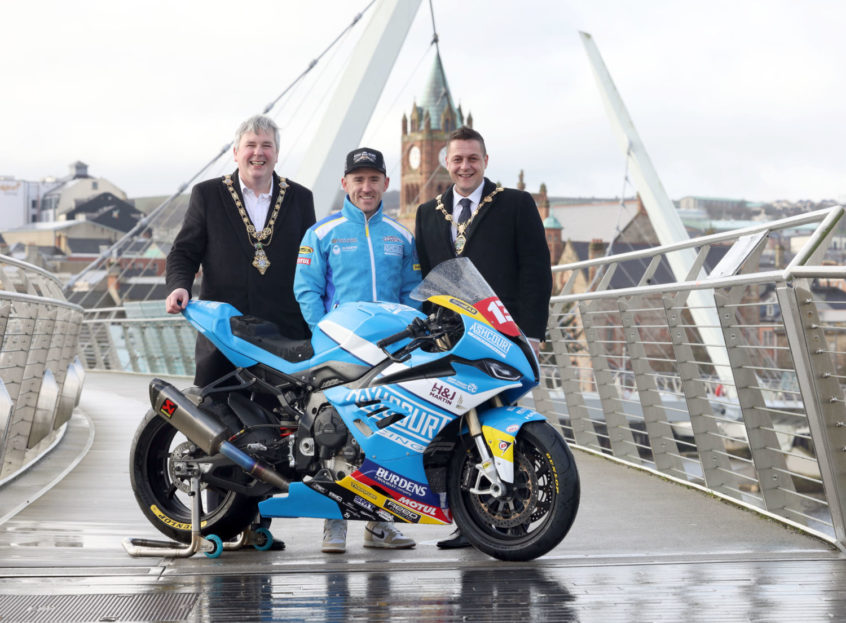 Lee Johnston was the guest of honour at a special reception in Derry/Londonderry today as the organisers of the 2022 fonaCAB and Nicholl Oils North West 200 gear up for a huge week of action on May 8-14 along the north coast.

Many of the hotels in Derry and elsewhere in the area are already fully booked for the week long event as fans plan their trip to the famous 8.9 mile Triangle course after a two year Coronavirus enforced absence.

The Mayor of Derry City and Strabane District Council, Cllr Graham Warke, welcomed the Fermanagh star and the Mayor of Causeway Coast and Glens Council, Cllr Richard Holmes plus NW200 race sponsors and officials to Ebrington Square and the City Hotel in the Maiden City.

“It is great news for the fans and local businesses that we can get back to racing at the North West again and I want to try to get back to winning too.” Johnston said.

Now recovered from the blood disorder that left him fatigued and in pain last season, the Ashcourt Racing star is fired up for the new roads campaign. He may not have enjoyed much between the hedges action since winning the opening Supersport race at the 2019 North West but the Yorkshire-based Fermanagh man kept his reactions razor sharp competing in the British Supersport championship.

Johnston finished third in the British series in 2021 after claiming two race wins on the same R6 Yamaha he will ride in the 600cc races at the NW200.

“The circumstances with no road racing over the last couple of years allowed us to go back to the British championship.” he explained.

“The last time I rode a full season in Britain was in 2010 but I felt comfortable in those surroundings again. In fact, I think I am riding better now than I have been during the last four or five years.”

One of the North West’s most experienced competitors with four race victories on his CV since making his debut in 2008, the 32 year old doesn’t feel the recent short circuit experience will provide a significant advantage on the roads.

“I don’t think it will because all of the other main people, like Peter Hickman and Dean Harrison, are racing in the British championships too.” he explained.

“And I don’t think it will make much difference that we haven’t been racing at the North West for the past two years either. If the weather is good on Thursday and Saturday then lap records will be broken because the people racing at the front will be fired up and want to win.”

Johnston will also return to the British Supersport fray but his priorities for 2022 lie firmly on the roads.

“That is where my heart is, in winning North Wests and TTs.” he says.

“That will always top winning British Supersport races. No-one will remember those races but they will remember the NW and TT wins. They are more prestigious in my eyes although that doesn’t mean I’ll not be trying as hard as ever in the British championship.”

On the roads, Johnston will be covering a full quota of classes in 2022, competing on S1000RR BMWs in the Superbike and Superstock races alongside his Supersport outings. He has also acquired one of the new Aprilia 660 machines for the Supertwin events.

The Fermanagh rider’s first North West wins came in the smaller capacity class when he won both of the Twins races at the 2014 meeting.

“When I was ill last year we sat down and talked about concentrating on the smaller bikes.” he says.

“Why bang my head against the wall if I wasn’t going to be strong enough to ride the big bikes? Thankfully I am feeling a lot better now but I still think that if I put in the work on the smaller bikes there is a chance to win. We will be making a serious effort to do that.”

Johnston recently quit his construction job to manage the Ashcourt Racing squad. Now fully in control of his racing set-up, he would love to repeat the success of 2019 when he won his first TT in the 600cc class a fortnight after his NW200 victory. He knows there will be plenty of competition though.

“Five or six riders could win in every race.” he smiles.

“There always is. Alastair Seeley, Dean Harrison, Michael Dunlop, Peter Hickman, Glenn Irwin and James Hillier will all be there with a lot of others. There are so many!”