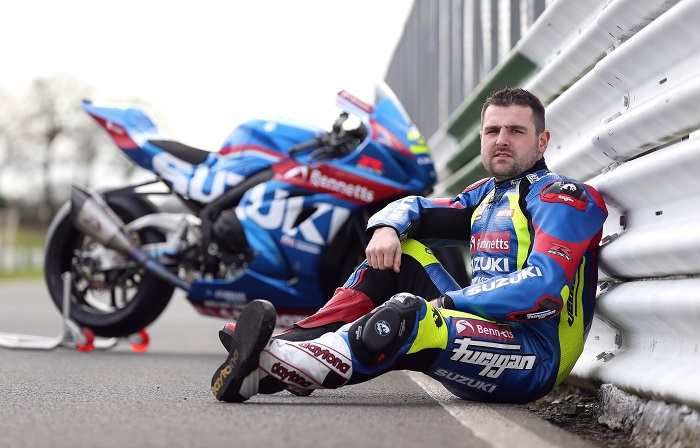 The 2017 Vauxhall International is set to see the hottest action in decades as home favourite Michael Dunlop announced he will race the new GSXR1000 Suzuki in Bennetts livery in May.
The Ballymoney racer, who is the outright lap record holder on the 8.9 mile Triangle circuit, will debut the new superbike against Honda rivals Guy Martin and John McGuinness on the new Fireblade. 17 times NW200 winner Alastair Seeley, last year’s Superstock race winner Ian Hutchinson, three time North West victor Lee Johnston and Peter Hickman will also be on the grid, ensuring a spectacular opening to the international road racing season in 2017.
27 year old Dunlop has recorded four wins on the seaside circuit, including victory in last season’s Superbike race on the Hawk BMW. Dunlop has opted to sit tight with Stuart and Steve Hicken’s squad after they shifted to Suzuki for 2017 and he is set to have his first road race outing on the new superbike at Portrush.
“I am back with the dream team for another wee spin.” the Ballymoney man smiled.
“It is good for me and it is good for Steve because the team has full factory support with Suzuki.”
“We want to have a good go at the North West.” team boss Steve Hicken said.
“It is important to us and it is important to Michael. It is a great event.”
“We are delighted that yet another rider is set to make his debut on a new superbike at the 2017 Vauxhall International North West 200.” Event Director, Mervyn Whyte said.
“Michael Dunlop is very, very popular with the local fans and I am sure they will be lining the hedges to cheer him in May.”