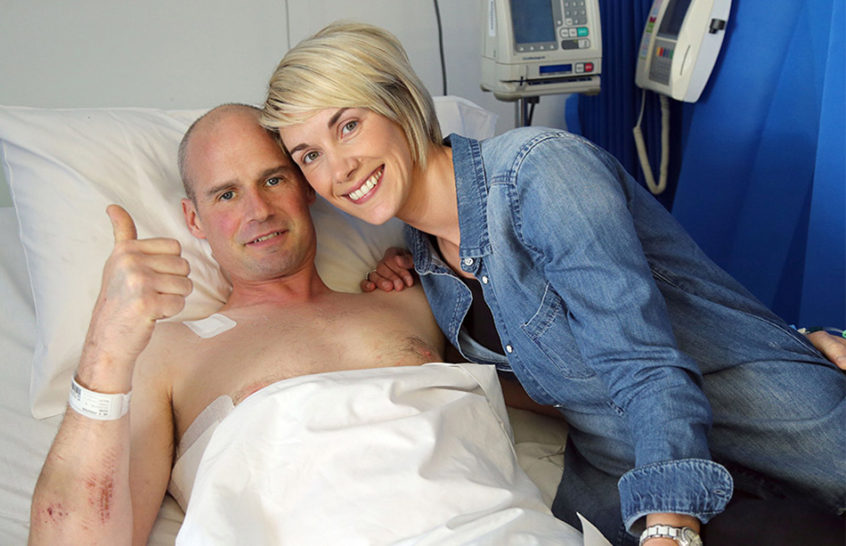 Ryan Farquhar’s Wife Karen Recalls The Moment She Knew Her Husband Was “going To Be Still With Us.”

‘I can’t thank the doctors enough who saved my life.’ Ryan Farquhar says in his first interview since his crash during last Thursday’s Supertwins race at the Vauxhall International North West 200.

‘Money couldn’t pay them for what they have done for me.’ the 40 year old Dungannon man said from his bed in the Royal Victoria Hospital.

Farquhar crashed whilst leading the race on the Portrush section of the 8.9 mile Triangle circuit and was airlifted to Belfast after being treated at the roadside by Dr Fred MacSorley and the MCUI Medical team.

“I want to thank Fred and his team.” Ryan said as he enjoyed a ham sandwich and a cup of tea in his hospital bed.

“I remember crashing and the marshals telling me not to move until Dr Fred got there. It is unreal how quickly he was able to work out what was wrong with me and when I got to hospital they told me that whoever prepared me for the journey had saved my life.”

Farquhar suffered a lacerated liver which was damaged by the six broken ribs he sustained after being hit by the bike of Dan Cooper who was just behind him. Cooper also crashed, injuring his shoulders in the impact.

“As time went on I knew that I was in bad shape.” Farquhar says.

“Money couldn’t pay them for what they have done for me.’ the 40 year old Dungannon man said from his bed in the Royal Victoria Hospital.”

He also suffered ankle and foot injuries and he says the protective Daytona boots definitely saved him from worse leg injuries.

Farquhar remembers clearly the moment that he knew he was going to crash.

“I lost the front end and I went down hard.” he recalls.

“I hit the Recticel bale and bounced back out into the road but everything happened so fast that I don’t really remember being hit by the other bike.”

The Dungannon racer spent several days in the RVH’s intensive care unit before he was able to join fellow racer Paul Gartland, who also suffered a lacerated liver in a NW200 crash, on a normal ward where he will stay for at least another week.

“I am looking forward now to getting myself sorted and getting home with my wife Karen, my girls Keeley and Mya and our two donkeys.” Ryan smiled.

“They were here on Sunday and I am sure it was a shock for them to see me with so many wires and leads coming out of me.” he says.

“But they are back at school and they both did well in their Sport’s Day so they will be all made up with that.”

In spite of the pain of his broken ribs Ryan was able to take a light hearted look at his injuries.

“It will mean my Dad can cut the grass for the rest of the summer because I don’t think I will be up to it for a while!” he joked.

Ryan Wanted The North West Racing To Go On

In spite of his own crash Ryan said he wanted the three riders who were competing at the North West on his SGS/KMR Kawasaki team’s machines to race on in Saturday’s second Supertwins race.

‘They all knew that was what I wanted.” Ryan said.

Jeremy McWilliams, Danny Webb and Darren James followed his wishes, racing the three bikes that Ryan had built himself in his Dungannon workshop as a mark of respect to their team leader.

‘I want Darren, Danny and maybe Michael Rutter to race my three twins at the TT too even though I won’t be able to be there myself.” he added.

Malachi Didn’t Do Anything More Wrong Than I Did But I Am Still Here To Tell The Tale And He Is Not. Ryan Farquhar says he was “very sad” to learn of the death of 20 year old Malachi Mitchell Thomas who lost his life in a crash at almost exactly the same spot as Farquhar ‘s accident in Saturday’s second Supertwins race at the Vauxhall International North West 200.

“Having raced against Malachi it was obvious to me that he was a huge talent.” the 40 year old reflected.”

The young Chorley rider had been involved in several race battles with the Dungannon man at the Mid Antrim 150 and Tandragee 100 earlier in the season.

“Having raced against Malachi it was obvious to me that he was a huge talent.” the 40 year old reflected.

“What has happened to the young fella is very sad. Malachi didn’t do anything more wrong than I did but I am still here to tell the tale and he is not.”

Both Ryan and his wife Karen offered their sincerest sympathies to Malachi’s family and friends and to fellow Dungannon couple Rachel and John Burrows who run the Burrows Racing squad that the 20 year old raced for.

Ryan Farquhar’s Wife Karen Recalls The Moment She Knew Her Husband Was “going To Be Still With Us.”

“I walked into Intensive Care and Ryan was lying in the bed not really able to speak or communicate with us.” Ryan Farquhar’s wife Karen says as she recalls the moment she knew that her husband was going to survive the horrific injuries he received in a North West 200 crash.

“He looked up at me and winked and then he squeezed my hand as tight as anything.” she says as she wipes her tears away.

“It was such an incredibly special moment because I knew then that he was going to be still with us.”

Karen’s nightmare had begun as she waited in pit lane at Portstewart for her husband to complete another lap during the Supertwins race last Thursday evening.

“It has been a real rollercoaster and to see him getting better now after being in intensive care just a couple of days ago feels like a miracle.” she smiles.”

“I was watching the big screen like everyone else and I glanced away for a second and when I looked back I realised that there had been an accident.” she recalls.

“I didn’t realise at first that it was Ryan and even when I was told that it was him I still expected him to come limping down through the paddock to me.”

The race doctors quickly made Karen aware that her husband had serious injuries and members of his SGS/KMR race team and friends rushed her to the Royal Victoria hospital.

“I went from being content to being worried all night long as I was given information by the doctors.” she says.

“I was told that he had an injury to his liver and then they told me the operation he had had was a success but I didn’t really realise just how serious things had been until they explained that Ryan had had internal bleeding and that he was lucky to have been in the right place at the right time to get the treatment that he needed.”

Karen is hugely relieved to see Ryan well on the road to recovery now.

“It has been a real rollercoaster and to see him getting better now after being in intensive care just a couple of days ago feels like a miracle.” she smiles.

“There are no words to describe my gratitude to the race medics and the doctors and nurses at the Royal for everything they have done for Ryan. They saved Ryan’s life.’

Throughout his ordeal Karen says Ryan wanted to be kept informed about what was happening at the North West 200.

“Even when Ryan was in intensive care he twisted his wrist in the same way you twist a throttle to let me know that he wanted to know what was going on with the racing last Saturday.’ she says.

“We have had so much support from friends and family, from the team and from people that we didn’t even know.”

Karen says her daughters are looking forward to getting their father home and ‘back to normality.’

‘Keeley wants to take him to a nice restaurant for a big feed and Mya says she can’t wait to get her Daddy home so he can take us to Tayto Park this summer!” Fermanagh racer Paul Gartland was also seriously injured at this year’s Vauxhall International North West 200.
Gartland crashed at University during the Superstock race. He was rushed to hospital suffering internal bleeding late of Saturday night and is now in a bed beside Ryan Farquhar as he recovers in the Royal Victoria Hospital.