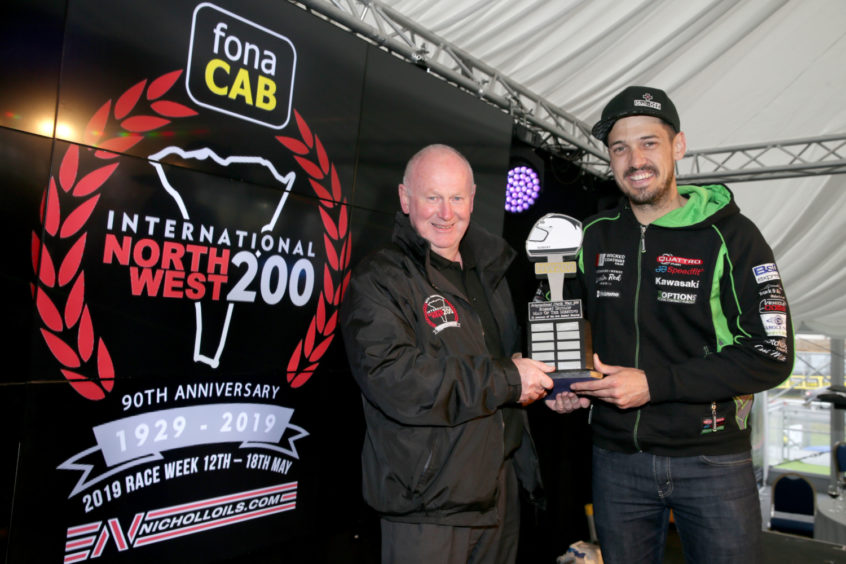 After a week of glorious weather on the north coast for practice, qualifying and Thursday evening’s superb race action, the heavens opened on the morning of Saturday’s race day at the 2019 fonaCAB International North West 200 in association with Nicholl Oils, creating challenging conditions for the event organisers.
Delays caused by the bad weather were exacerbated by non racing incidents arising from the collision of a helicopter with power lines near Portrush. Despite the problems, the organisers battled on, eventually running four of the five races in the scheduled programme.
The Junction Retail and Leisure Park Supersport race was eventually completed at the third time of asking following red flag incidents in the first two starts. Last year’s fastest newcomer at the North coast event, Davey Todd, claimed his first international road race victory ahead of Derek McGee (B&W Kawasaki) and his Milenco Padgett’s Honda teammate, Conor Cummins.
The Anchor Bar and Restaurant Complex Superbike race began on drying roads. Shortened from 6 to 4 laps it saw a huge battle develop between Quattro Plant Kawasaki teammates, Glenn Irwin and James Hillier with Irwin securing his 4th NW200 superbike victory in a row following a final lap move at Juniper.
Conor Cummins claimed his second podium of the day on the Milenco Padgett’s Honda Fireblade and Derek Sheils (Burrows/RK Racing Suzuki) had a brilliant ride to 4th ahead of Alastair Seeley on the PBM/Be Wiser Ducati.
The JM Paterson Supertwins race produced a fairytale win for 55 year old Jeremy McWilliams (KMR/ Bayview Kawasaki) after a race long battle with Christian Elkin (Dynocentre NI Kawasaki). Another NW200 veteran, Michael Rutter took his second podium of the week on the KMR/Bathams Kawasaki after finishing third in Thursday evening’s Supertwins race. The winner of Thursday’s encounter, Stefano Bonetti, crashed out of Saturday’s race at York.
After a week that had already seen him claim a third place finish in Thursday’s Supersport race and a runner up position in the earlier Superbike event, James Hillier (Quattro Plant Kawasaki ) secured the victory that saw him crowned Man of the Meeting in the CP Hire Superstock race.
A newcomer to road racing and the North West, Richard Cooper put in a fantastic performance to claim runner up spot on the Buildbase Suzuki ahead of Davey Todd on the Penz13.com BMW. Dean Harrison (Silicone Kawasaki) was 4th with Swiss newcomer Lukas Maurer (Heidger Kawasaki) posting an impressive 5th ahead of Michael Rutter (Batham’s BMW).
An extension to the road closing order allowed the parade lap of former North West 200 winning machines and riders to take place. With conditions deteriorating as the light faded on a long day of racing the race organisers decided to cancel the Merrow Superbike race after the sighting lap in the interests of safety.
‘I want to thank everyone who visited the 90th anniversary fonaCAB International North West 200 in association with Nicholl Oils this week.’ Event Director, Mervyn Whyte, MBE, said afterwards.
‘Despite Saturday’s less than perfect conditions we have enjoyed a fantastic week of road racing with unforgettable victories for the seven different winners in each of the seven races. Huge congratulations must go to all of the teams, competitors, sponsors, fans and volunteers who have made the running of the 90th event such a memorable occasion.’