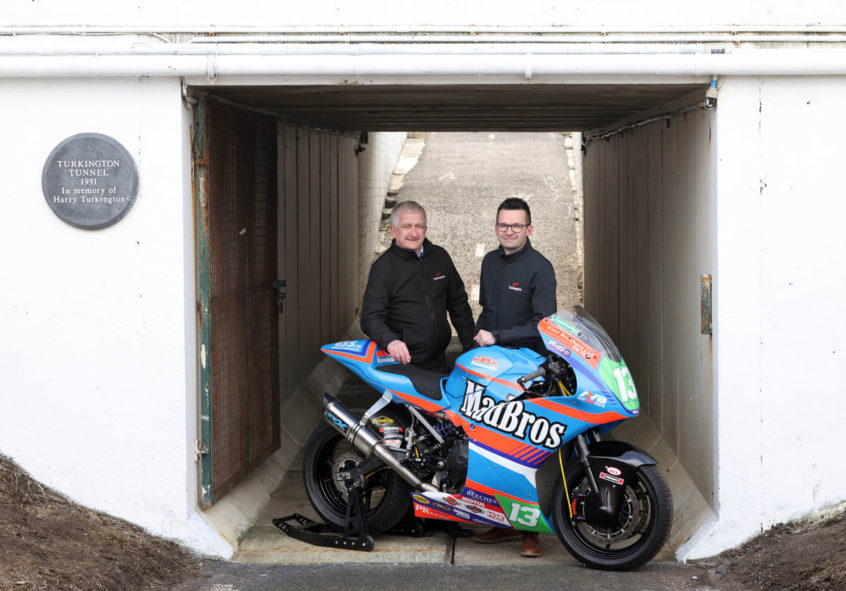 Portadown based construction company, Turkington, will sponsor the Thursday evening Superstock race at the 2022 fonaCAB and Nicholl Oils North West 200. The local firm is renewing a celebrated association with the north coast event.

“Not only did Turkington sponsor the Superbike race in 1991, but through Harry Turkington we kindly donated the famous ‘Turkington Tunnel’.” Operations Director, Gary Turkington, said.

“Following the careful assembly of the 70 tonnes jigsaw puzzle, the new tunnel was warmly welcomed as a major safety improvement by providing safer and easier access from the paddock to the grid. Over 30 years on, we have cemented our relationship with the fantastic NW200 team, coming back to support and sponsor the Superstock race.”

A special plaque was recently unveiled at the tunnel entrance by Trevor and Gary Turkington to mark the occasion of its construction.

“I have fond memories of the 1992 NW200 when our company sponsored Phillip McCallen.” Gary Turkington added.

“Phillip became the only rider to win five races in a day at the North West, a record that still remains unbeaten. As keen followers of road racing we are very excited to be part of this thrilling spectacle once again and are especially proud to be returning as sponsors of the Turkington Superstock race.”

The diverse, multi-skilled company has been responsible for many prestigious developments throughout Northern Ireland since 1951, including the new DAERA Headquarters in Ballykelly, the Jaguar Land Rover Showroom in Belfast and the Ulster University student accommodation at Coleraine and Jordanstown.

“Turkington are old friends of the North West 200 and we are delighted to have the company back on board.” Event Director, Mervyn Whyte, said.

“Their company livery has been to the fore during significant moments in the history of the NW200 and will be back on display in 2022.”